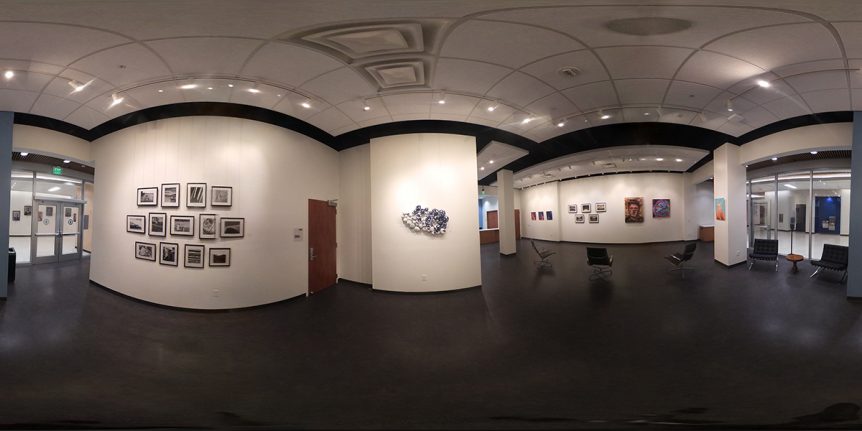 Located in the heart of the University of Florida campus, the Reitz Union is a familiar place for newcomers and alumni. However, more than a hub for student organizations and a spot to grab a quick bite to eat, it has long helped connect students to the arts.

The Arts & Crafts Center, located in the Reitz Union and part of the Division of Student Life, is a welcoming environment for visitors to follow creative pursuits. In addition to hosting free events for UF students and personalized socials for groups, the center also offers an array of “leisure courses” where students can learn skills including ceramics, painting, drawing and jewelry making without the pressure of graded assignments.

The staff also oversee an art gallery, a place for students and members of the UF community to showcase their work. Today, the room is known simply as “The Gallery,” but the space itself has been an integral part of the Reitz Union’s artistic history since the building opened in 1967. 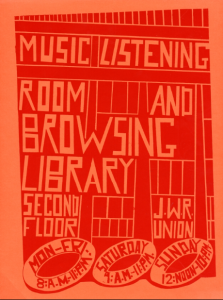 Then, The Gallery was the Music Listening Room and Browsing Library, a place where students could borrow vinyl records and listen to them in soundproof booths. A selection of magazines and newspapers was tucked farther back in the space, and students could be found reading periodicals such as the New York Times by sunlit windows.

In 1994, the space was transformed into an art gallery. Since then, it has continued its mission of introducing students to art and uplifting community artists, said Jill Keezer, the manager of the Arts & Crafts Center. After more than 40 years working in the union, she’s proud of how far The Gallery has come.

Recent exhibitions include “MOVING ENTITIES,” a collection of collages inspired by artist Monsur Awotunde’s Yoruba heritage, and a series called “What were you wearing?,” designed to refute the idea that revealing outfits are partly to blame for sexual violence.

“We’re doing a much better job of exposing students to art,” Keezer said. “I often will go up there and see people that are just sitting there gathering their wits or working on their laptop. I think it feels like a safe space.”

For some, the Arts & Crafts Center and The Gallery inspired art careers.

One such artist is ceramicist Mariana Baquero, the arts specialist at the center. She initially graduated from UF with a bachelor’s degree in political science, later earning a law degree and practicing for several years. But through it all, she said, she kept thinking back to a ceramics leisure course she took in the union as an undergraduate.

Eventually, Baquero decided to make a change and returned to UF to earn a master’s degree in ceramics before starting as art specialist in 2016.

From 2014 to 2019, The Gallery served as temporary office space for staff based in parts of the Reitz Union under construction. Since it reopened in 2019, Baquero has worked closely with artists showing there to help install, frame and photograph their work.

“Being an artist myself, I remember not really understanding how to showcase my work in a professional way,” she said. “Having people help me with that and give me advice was really useful, so I’m glad that I can do that now for other artists.”

Another such artist is painter Brittany Webber, who first exhibited at The Gallery thanks to a chance meeting with Keezer at a Gainesville vintage pop-up market in 2019. 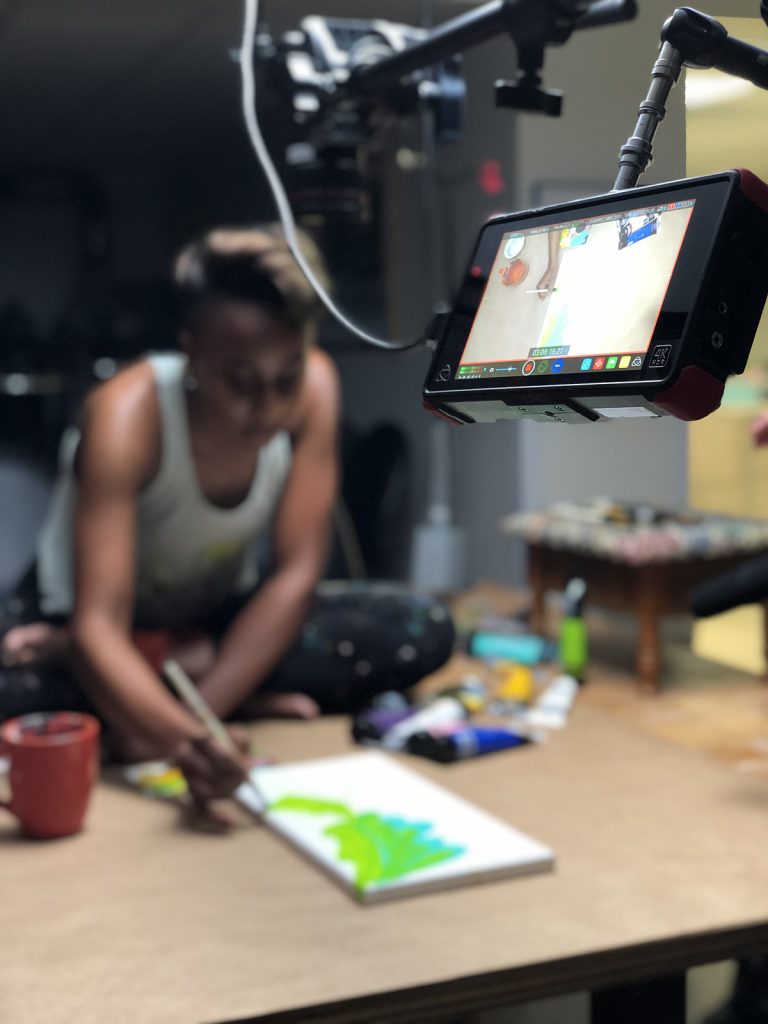 “I’ve always had a really strong love for putting pen or pencil to paper,” said Brittany Webber. She is pictured filming a time lapse to promote the abstract painting course she previously taught at the Arts & Crafts Center. Photo courtesy of Brittany Webber

After winning one of Webber’s paintings in a raffle, Keezer asked if Webber had ever considered teaching art and proposed an idea: Webber could teach a painting class for beginners at the Arts & Crafts Center and show in the newly re-opened gallery.

The opportunity inspired Webber to plunge into a full-time art career — something she had been considering long before her graduation from UF only three months prior.

Webber was about halfway through her bachelor’s degree in architecture when she realized that although she loved architecture as an academic discipline, it wasn’t work she could see herself doing “day in, day out.” Instead, she resolved to incorporate her understanding of architecture into her artwork.

“Sometimes you just have to take the risk for yourself and the things that you really want,” Webber said. “And that’s exactly what I did.”

As a teacher at the Arts & Crafts Center, Webber confronted a new challenge: figuring out how to transform her internal creative dialogue into a conversation that made sense to her students.

She explained that architecture often involves theorizing about the ways different components interlock. Inspired by this, she ties elements of history, geography, line work and mark making — among other styles and subjects — into her paintings, sketches and digital designs. At the same time, Webber said, she strives to make her work playful through color and form.

“I feel like I’m in a constant experiment with myself to figure out different ways of connecting the two,” she said.

Webber, who taught at the center until recently, added that she always hoped students would leave her class feeling like they had a reliable outlet for creative expression.

“We’re hard-wired for creativity. We’re not wired for sitting in front of a computer for eight to 12 hours a day. We’re not wired for all work and no play,” Webber said. “Getting people to take time out of their day and really indulge themselves is really beautiful and incredibly important to the overall quality of human life.”

Students who display their art at The Gallery also gain valuable experience.

There, undergraduates who have yet to declare their major or students familiar with art only as a hobby have access to a useful learning opportunity, Baquero said. The small size of the room takes the pressure off beginning artists who may not have large enough collections to fill a traditional gallery space on their own.

The space has also doubled as the entryway to the Reitz Union Auditorium since it reopened in late 2019 after undergoing its own set of renovations. Baquero said the change gives students’ work a “built-in” audience. 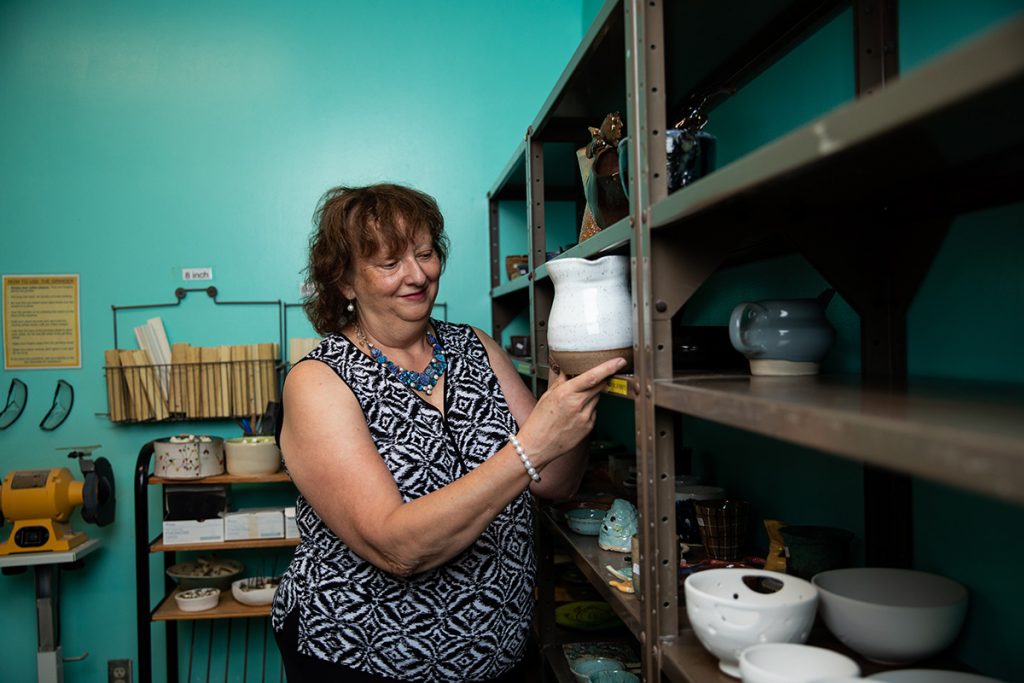 “Art communicates openness and acceptance and diverse cultures — that’s part of our role,” Keezer, who has worked at UF since 1979, said. UF Student Life photo by Matthew August

“I really love that I’m able to connect the artists on campus with people to see their art,” Baquero said. “It’s one thing to paint something beautiful, but if it stays in your studio or in your house and it’s not exhibited, you’re not reaching the full potential of that art.”

But for many, it’s the simple things that count. Keezer said that, for much of the last year, classes at the Arts & Crafts Center have focused on creating an environment for students to destress. “Play with Clay” events, for example, gave students bags of clay and basic instructions on how to mold figures.

“When I saw the students playing with clay and laughing, I thought ‘Oh my God, I haven’t heard laughter in so long’,” Keezer said. “This is joy. This little simple act of giving them a couple pounds of clay and offering to fire it for free — it’s made their day.”

Learn more about The Gallery and current exhibitions.

Apply to show at The Gallery.