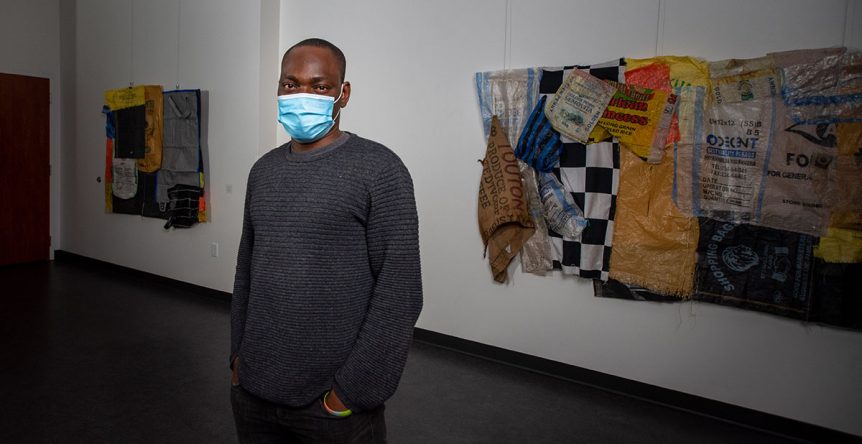 Monsur Awotunde‘s interest in art sprang from a natural talent for drawing. From childhood, he was inspired by the colors, textures and flavors around him. As his surroundings changed, so did his work.

“I’m an artist in transit,” he said. “And my work is a traveler, too. We travel together.”

But the destination varies. Awotunde’s style, defined by the colors and textures he works with, has steadily changed over time. Themes of home, desire, travel and memory fuel his work, harkening back to his Yoruba heritage – specifically, the traditional meals his mother served in the family’s restaurant in Lagos, Nigeria.

“Food has played a very important role in my personal life,” he said. “As a young child, most of the time, I ate with my family and everybody would be served proportional amounts of food. I’d finish my own and still asked for more, more, more – that kind of thing was always been there.” 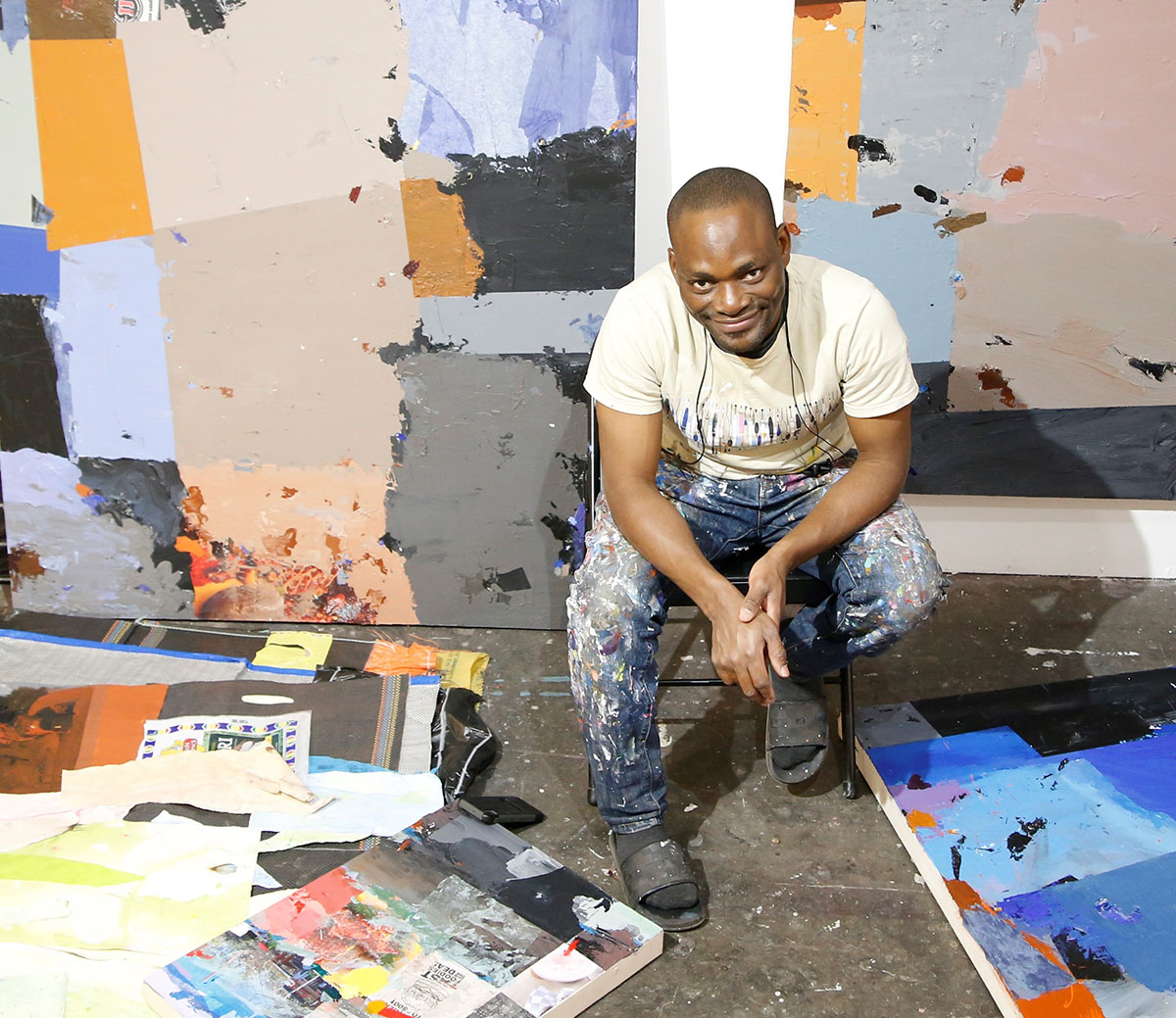 Awotunde, who has studied art for nearly two decades, arrived at UF in 2018. Photo courtesy of Monsur Awotunde

He said that most Nigerian audiences appreciate art that represents subjects as they appear. But he sought early on to forge an identity for himself and his work by using varying shapes, colors and textures to convey his ideas.

“I was always thinking about how to have my own voice or personal identity. How can I make something that can be traced to me? That will be unique to my own personal signature?’” Awotunde said.

His art shifted from representation to abstraction when he arrived in the U.K. The colors he used were muted, mirroring the region’s gray landscape in contrast to Nigeria’s vibrant palette.

Now, Awotunde uses the same muted tones to invoke the sensation of reflecting on a buried memory. In Florida, his sense of longing for Yoruba meals became a source of inspiration. He turned to fast-food packaging – juxtaposing a wrapper from a Jimmy John’s sandwich or a paper bag from Taco Bell with flour, coffee and produce sacks from West Africa – as new ways to add pops of color to his paintings, layering flavors from his present with those of his home.

“When you are in somewhere different from your familiar space and you’re away from your family and friends, you can’t get rid of the emotional attachment of the people that have been in your life for a very long period of time,” he said. “No matter how quickly you can mix with a new set of people, that presence is always there.”

Motion tinged with nostalgia was a primary theme in his most recent solo exhibition, MOVING ENTITIES, which premiered in the Reitz Union art gallery in March.

“For my American audiences, I feel the exhibition might make them think about a sense of place when they see the works. I want them to sense other places that exist,” Awotunde said. “But I feel, for other audience from Africa or those people who are familiar with the materials and objects used in the works, the experience could give them a sense of memory or that nostalgic idea of what they left behind when they came here.”

He added that the pieces in MOVING ENTITIES were ones he felt represented him, speaking for him whether he was there or not. But explaining the emotions that underlie his work is something he still looks forward to.

“I think it’s one of the things I always liked doing anyway – for you to be ready for explanation about my work, that means you are interested in the work,” Awotunde said. “I’m able to make you really start thinking about how I’m thinking and seeing through my eyes. And I always feel very excited to do that.”

The Gallery at the Reitz Union is located on Level 2 of the building. Exhibitions rotate on a monthly basis and admission is free. The Gallery is open daily from 7 a.m. until 7 p.m. View the current exhibition or apply to exhibit your artwork here.