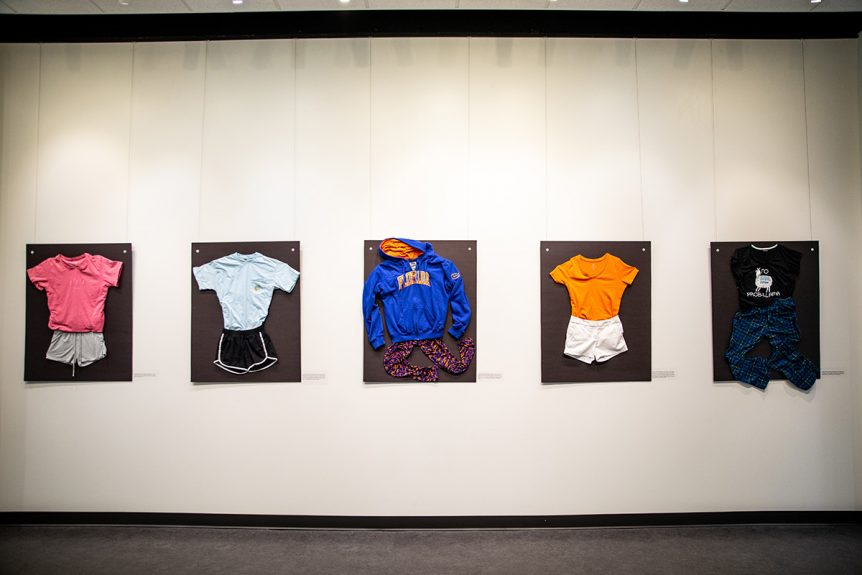 From pajamas to exercise clothing, outfits on black backdrops accompany 19 brief accounts of sexual violence against University of Florida students. The exhibit ­– titled “What were you wearing?” – rebukes assumptions that revealing clothing could have been partly to blame for the attacks. It will be on display in the Reitz Union art gallery through May.

The outfits were donated by the UF chapter of the American Medical Student Association to match stories anonymously shared by UF students. Many of the outfits include running shorts, T-shirts, pajama pants and jeans, challenging preconceptions that what victims wear provokes sexual violence. The idea that victims of crime are partly or fully responsible for the actions of offenders is called “victim blaming.”

“It’s language like, ‘Why did you do that? You should have known better.’ Or ‘What were you wearing? Who was with you?’” said Megan Johnson, a specialist at GatorWell Health Promotion Services. “You look at someone who was wearing leggings and a hoodie, for instance, and they were sexually assaulted. It has nothing to do with what they were wearing, so why do we continue to ask those questions?”

“When we start normalizing it, we don’t necessarily recognize it as wrong as a society,” Johnson said. “Normalizing things at lower levels makes it easier to digest what’s higher up.”

But permanent programming at UF, such as the Green Dot Bystander Intervention Program, is essential to preventing violence in addition to raising awareness, Johnson added. The training, open to groups of 10 or more students as a 90-minute virtual or a four-hour in-person session, centers on preventing violence by equipping people to intervene in potentially dangerous situations.

“On its own, the exhibit would not necessarily prevent violence from happening, but combining it with other work we’re doing in our office is what’s going to have that impact,” said Johnson.

Sexual violence includes forced sexual activity, domestic violence, rape, dating violence and stalking. In 2019, a survey conducted at 33 major universities, including UF, found that 13% of students experienced non-consensual sexual contact. But undergraduate women and transgender students were most at risk, with more than 20% reporting sexual violence compared to about 7% of men.

UF’s “What were you wearing?” exhibit is similar to others that have taken place across the country, the first of which debuted at the University of Arkansas in 2013. The displays are based on a poem, What I Was Wearing, written by Dr. Mary Simmerling in the early 2000s. 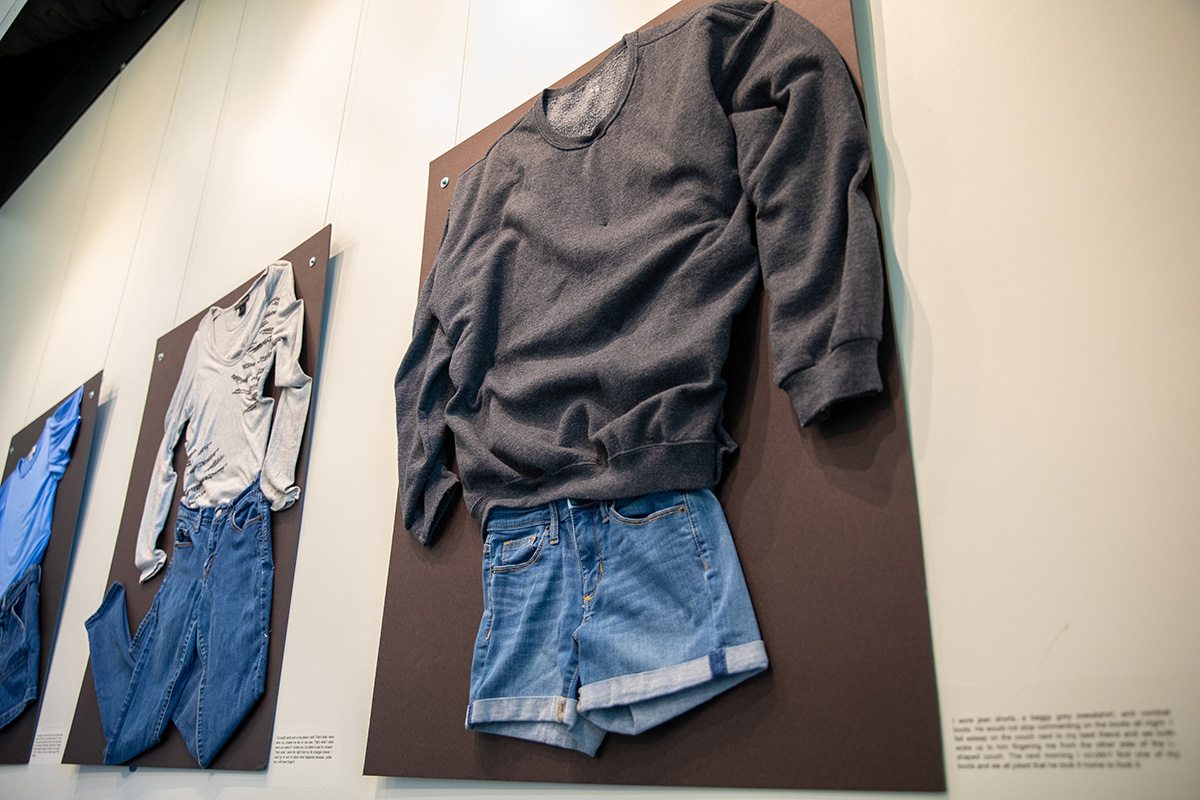 The exhibit underscores that victims of sexual violence are never “asking for it,” Johnson said. “We want to instead teach people that it doesn’t matter what a person is wearing. You always have to ask for consent.” she said. UF Student Life photo by Matthew August

It first appeared in 2018 in Ustler Hall thanks to a collaboration between the American Medical Student Association and STRIVE, a former peer education group on sexual violence.

This year, Johnson and Katherine Morgan, a graduate student outreach coordinator at GatorWell, upgraded the display from a temporary arrangement to a polished gallery exhibit. Johnson said the shift – which marks the first time the stories were shown in a dedicated gallery space – signifies appreciation for the exhibit after a two-year hiatus. She plans to make it an annual event.

“It was really important to me to show that the exhibit has value and people appreciated it,” Johnson said. “You can say it has value, but showing that value is important.”

Johnson added current students, parents, staff and people touring campus have visited the exhibit since it opened in April, which is Sexual Assault Awareness Month.

“If you have a survivor coming to this space, you want them to feel visible and like their voice is heard in these displays,” she said. “If somebody hasn’t experienced this, we want to show them our campus cares about this topic and that we want to make a change.”

If you or someone you know has experienced sexual assault, the Alachua County 24-hour Sexual Assault Helpline number is 352-264-6760. The Office for Accessibility and Gender Equity and the Office of Victim Services offers additional resources and support.

The Gallery at the Reitz Union is located on Level 2 of the building. It is open daily from 7 a.m. until 7 p.m. and admission is free.