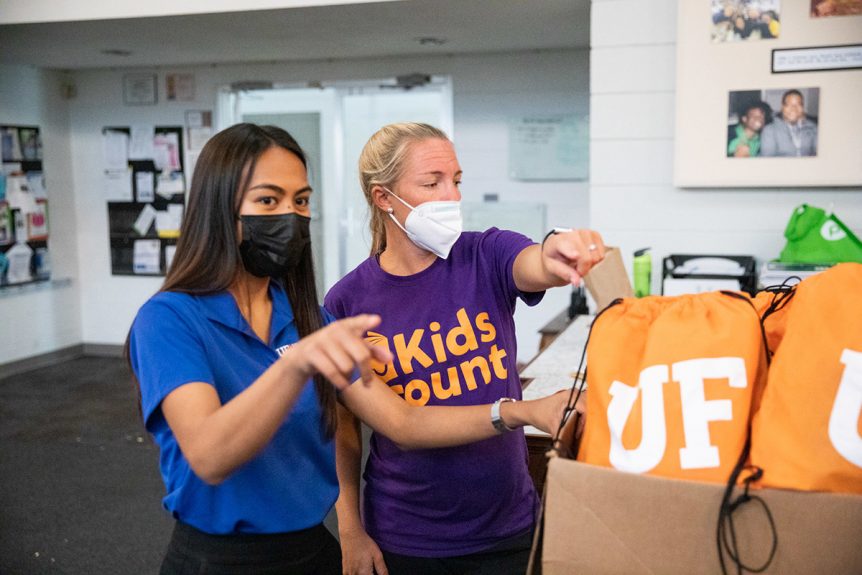 In early August, elementary school students and their families filtered through the doors of a Gainesville church. They were there to pick up free school supplies, including backpacks, notebooks, writing utensils and school uniforms. Many stayed to mingle, eating dinner, lining up for cotton candy and listening to music.

The event, a back-to-school bash marking the beginning of the school year, was led by Kids Count, a local nonprofit, and the University of Florida Division of Student Life.

“This is an opportunity to give back in the way that we’re supposed to as a land-grant institution,” Washington said.

He and Difato help provide elementary, middle and high school students with tutors, mentors and school supplies, in addition to arranging tours of UF’s campus and workshops to build community among students, educators and family members. Meeting students’ basic needs by supporting events such as Kids Count’s back-to-school bash is an essential building block, Difato said.

“In order for someone to succeed through a workshop or in a class there, they need a pencil,” she said. “But we’re not just handing out pencils and notebooks – we’re doing that with the intention of following up.” 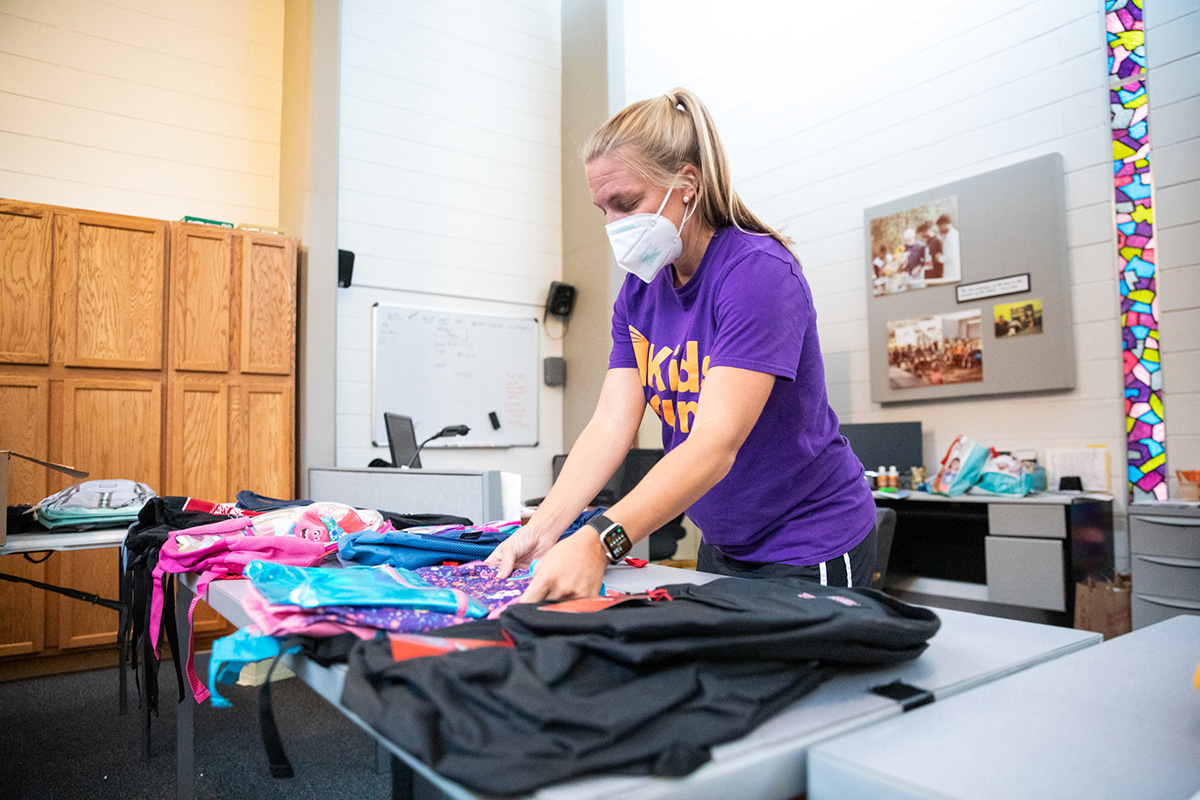 Over time, new development sparked by UF’s growing student population has raised the cost of living near the university and reduced the number of single-family homes. As a result, many longtime residents of the historically Black neighborhoods near UF – such as Porters Quarters, Seminary Lane and Pleasant Street – have moved, some farther away from grocery stores, businesses and schools concentrated on the city’s west side.

In 2018, a survey by Florida’s Bureau of Economic and Business Research found that most of the city’s Black residents live in East Gainesville. According to the study, Black residents also experienced the sharpest disparities in income and access to schools where students performed best on state exams.

The web of systemic factors shaping East Gainesville means that it’s important to establish sustainable programming, Difato said. Because leading the initiative is a central component of her and Washington’s roles, they’re uniquely poised to help coordinate UF’s efforts addressing local inequality across UF to make lasting impacts, she added.

“Sustainability is partnering with people who already do work in the community and just centering our work around their biggest needs – hopefully, those needs won’t be there in the future, but right now it’s going to be a really long battle,” she said. “People who believe there is hope in the end are continuing to do this work.”

Since launching the initiative just over a year ago, Difato and Washington have met with community leaders and principals at East Gainesville elementary, middle and high schools. Through those meetings, they developed three priorities: addressing the schools’ need for tutors and mentors; boosting college preparedness, access and exposure; and providing opportunities to build parent and family engagement. 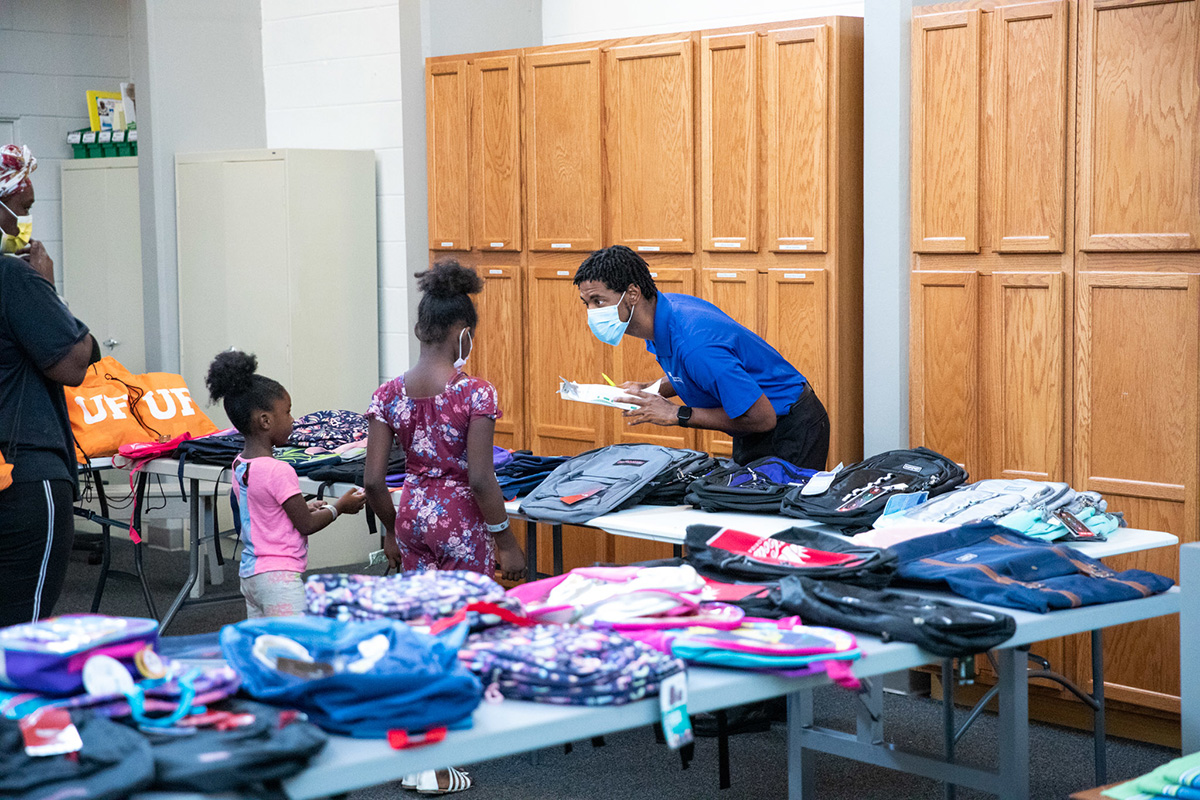 When principals start voicing similar concerns, that’s when they know they’re onto something, Washington said.

“I think that’s the number one way to start actually creating a strong partnership in community engagement work and making sure we’re not reproducing the systematic issue,” he said. “Making sure that the community is a part of this conversation and they have a voice in that space. Not just a voice, but one that is heard and taken seriously.”

He added that ensuring students are connected with UF students, alumni and faculty who look like them is key, especially for students who could be the first in their families to attend college.

“Being able to see yourself reflected in another person, it means you’re more likely to do it yourself,” he said. “Once you’re able to see someone else who’s done it, who’s been in a similar place to you or has the same experiences as you, it feels like it’s a little bit easier and more possible.”

The hope is that their efforts will have lifelong impacts on students. 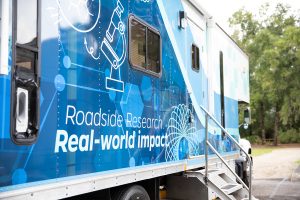 “When you speak into someone’s life and you tell them that they are worthy, that they are able to go to college, that they are smart enough and then you give them the tools, the education and the resources, that can literally change their trajectory, their mindset, their whole persona and view on what they can do,” Difato said.

Last spring, she and Washington hosted a workshop for students of Joseph Williams Elementary School, a local school where the majority of students’ families live at or below the state poverty line.

When Difato asked who among them wanted to go to college, students turned their cameras on “just to raise their hands,” he said.

“It was like, they knew they wanted to go to college. Now it’s our job to get them there.”

In addition to Kids Count, UF Health, the Division of Enrollment Management and Greenhouse Church supported the back-to-school bash on Aug. 5.

Kids Count is free to students enrolled in the program. Donate here, or sign up to volunteer as a tutor here.

Learn more about the Division of Student Life.