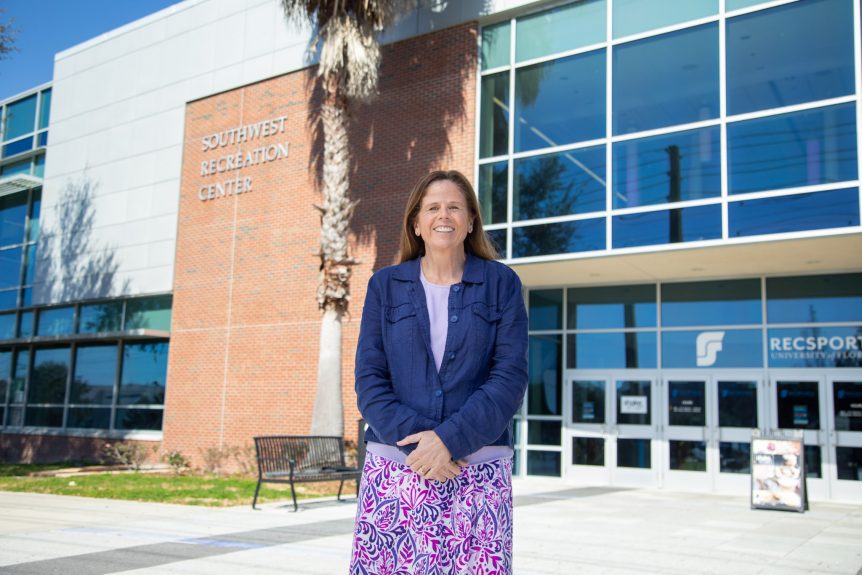 With more than 25 years of experience in collegiate recreation, Laura Hall is bringing her talents across the country to the University of Florida. The California native joined the UF team in February as director of Recreational Sports.

In 2016, Hall was hired as senior director of campus recreation at Penn State University. She made the leap to collegiate recreation after nearly eight years as a full-time college basketball coach, holding director positions at both of her alma maters. Hall earned bachelor’s in both exercise physiology and sociology from the University of California, Davis before going on to earn a master’s in sports psychology from California State University, Sacramento.

Now, Hall said she’s eager to start contributing to UF’s Recreational Sports, which is part of the Division of Student Life.

“There is lots of room for growth, evolution and possibilities, so that for me is really exciting,” she said. “Getting to come and help guide the next iteration of recreational sports here is a cool opportunity.”

As director, Hall supports and guides professional staff, working to ensure the health and wellbeing of the campus community. Reflecting on her past experience in similar roles, she said an important element of the position is maintaining a clear focus on how to best serve the student population.

“It’s just a really acute focus on what is best for our students’ needs recreationally and beyond,” Hall said. “It takes any personality out of things. It takes ego out of things.”

This means supporting students both inside and outside the classroom, she said.

In previous roles, Hall contributed to several projects that kept this very core emphasis in mind. She was part of the design, construction and opening of a comprehensive recreation center on University of California, Davis campus.

Hall also collaborated on a similar project at Penn State University, creating the concept for a facility that would provide students with an opportunity to escape the hustle and bustle of campus. The space, which she said resembled UF’s Lake Wauburg, emphasized holistic wellbeing by offering a natural, quiet place for students to relax and recenter.

In the Swamp, Hall said she plans to spend some time understanding the new environment and appreciating the culture. Then, it’s straight to strategic planning.

“How do we want to move forward?” she said. “What might we be able to do that maybe we’re not doing today that can serve students in new, exciting and different ways?”

The most rewarding part of the job, Hall said, is going out into the field and getting to see the results of the work she and her team have done. She said she’s already felt this on UF campus by watching thousands of students engaging in activities intended to support their own wellbeing. At the end of the day, this is what gives her purpose.

“It’s not necessarily about what we’re doing,” Hall said. “It’s about why we’re doing it.”