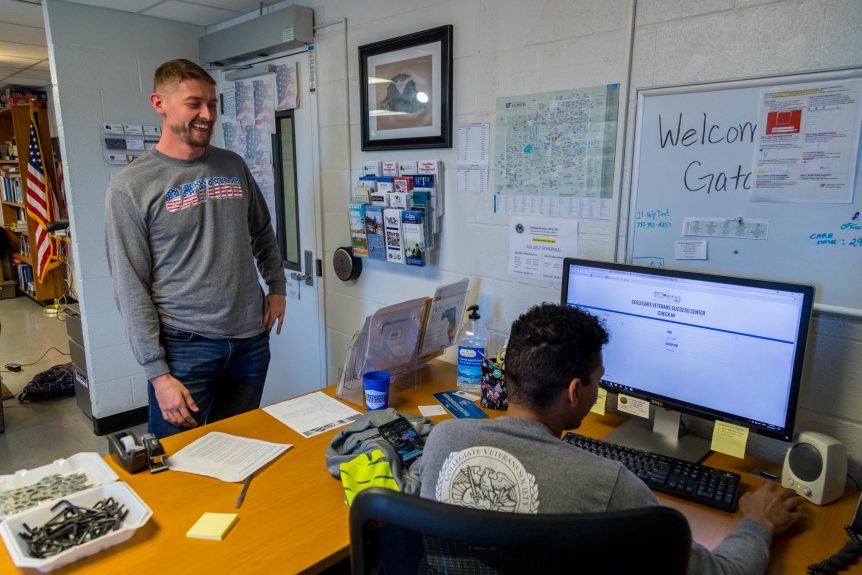 Savanna Turner returned to the familiar brick buildings of the University in 2019, roughly a decade after she first set foot on the campus as an undergraduate. Usually talkative, she found herself remaining quiet and reserved, she said. After a five-year run as an active-duty member of the U.S. Coast Guard, she wasn’t sure how to connect with other graduate students.

“It was very challenging in the beginning to transition mentally out of the active-duty mindset. Not bad, but just different,” Turner said. “It’s sort of like losing a family in a way.”

Between 2011 and 2016, Turner, now a Ph.D. student studying agricultural education and extension services, had been stationed in Connecticut, Louisiana and Georgia. She traveled to countries including Canada, France and Aruba and took on a variety of duties, including training cadets, inspecting foreign cargo ships and investigating sources of pollution. 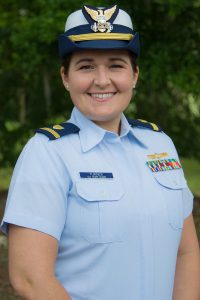 Savanna Turner, who is now president of the Collegiate Veterans Society at UF, spent five years as an active-duty member of the U.S. Coast Guard. Photo courtesy of Savanna Turner

“My life experience is so vastly different and I’m older than most people,” she said. “So that was kind of a challenge. Like, how do I communicate with others without sounding like I’m just boasting about my experience?”

Turner’s sense of belonging shifted when she found the Collegiate Veterans Society at UF, where the shared experiences of others enabled her to form meaningful connections. Now the president, Turner helps other military-affiliated students – including active-duty service members, veterans, spouses and dependents – find connections on campus.

Veterans at UF are often at different life stages than their peers after serving in the military, said Dr. Brian Ray, director of the Elizabeth B. & William F. Poe, Sr. Ethics Center at UF and chair of the university’s ROTC committee.

“Student veterans usually have more refined skills in the sense of leadership or team building, or maybe time-management, meeting deadlines and self-discipline. We bring a lot of those skills to the table when we come here,” said Ray, a colonel in the Army Reserve with more than three decades of service. “I think it helps us succeed, but only if we’re in a supportive environment that allows us to utilize those.”

In spring 2021, Turner piloted a peer mentoring program for student veterans in which seasoned students are paired with new ones to introduce them to educational benefits they may qualify for, help them acclimate to campus and connect them with career development opportunities. With help from the Collegiate Veterans Success Center, she hopes to make it permanent.

Currently, one of the primary offerings at the Collegiate Veterans Success Center is a place for student veterans and military-affiliated students to gather.

“It’s a sense of comfort to know that other people get me,” Turner said. “Having other people who have similar life experiences and are the same age going through similar things and knowing I can talk to them if I’m in the center is really nice.”

Ray and Turner said some veterans keep their experiences private to blend in with traditional students, which can make it difficult to build relationships among one another. Military-affiliated students, totaling approximately 2,100 at UF, are a fraction of the population.

As a result, identifying them can be a challenge, Turner said.

“We are able to hide, to divulge what we want because it’s not a physical appearance,” she said. “It’s a challenge to find us. That’s one of our barriers right now – how do we find who we are?”

One of her primary goals is growing the network of veterans and military-affiliated students on campus, she added.

“We want to create a sense of community and a place that people feel safe and included and they feel like they belong somewhere,” Turner said. “I think that sometimes we tend to think more like, ‘I can do this on my own, I’m self-sufficient,’ because that’s how we’ve been trained to think.”

Ultimately, Turner hopes student veterans and their loved ones can incorporate their lived experiences into their lives at UF.

“I think that that’s really important that you have a supportive environment for us to be able to flourish and be able to utilize those skills, not only for ourselves, but be able to help other students as well.”

In a new episode of the From Florida podcast, Roselind Brown of the Collegiate Veterans Success Center highlights UF’s history of working with veterans, while Savanna Turner, who served in the U.S. Coast Guard, talks about the opportunities and challenges veterans face on a college campus. Listen here