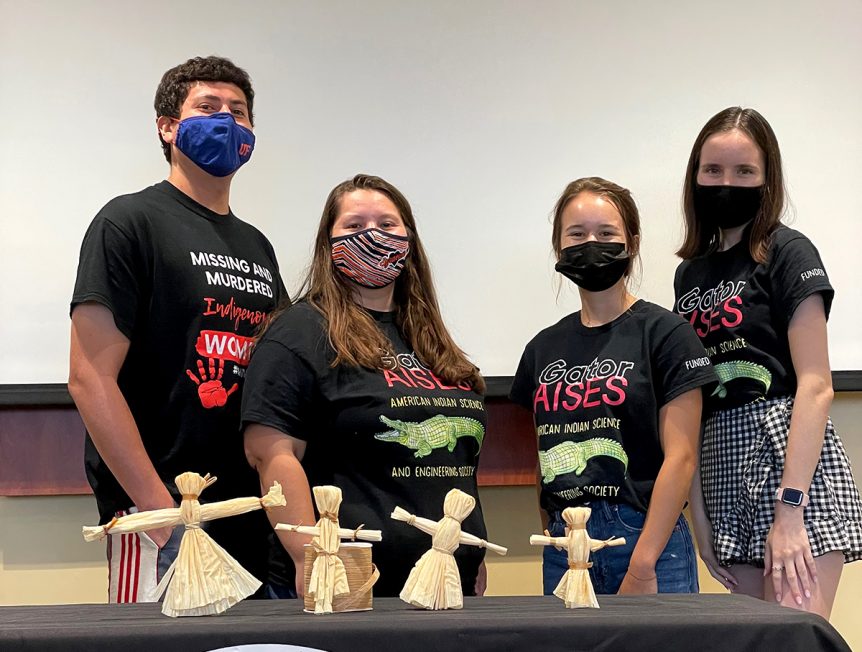 Infused with deep cultural knowledge, the perspectives of Indigenous peoples both predate and drive scientific discoveries.

In a workshop at the national conference of the American Indian Science and Engineering Society, abbreviated AISES, a physicist recounted how a team of scientists introduced a new predator into an environment in the hopes of reducing populations of ladybugs that were covering telescopes. It didn’t work.

“If you had asked an Indigenous person in the community, they would have said, ‘Just build something taller next to it,’ and then all the ladybugs would have gone over to the tower and you would have been perfectly fine,” recounted Brendan David-John, vice president of AISES at UF. “If you just don’t have that perspective, you don’t see it.”

Brendan and Mikaela David-John co-founded the Gator Chapter of AISES with several other students through Student Activities & Involvement, part of the Division of Student Life, at the University of Florida in spring 2020. Brendan David-John is a Ph.D. student studying computer science at UF affiliated with the Seneca Nation of Indians. Mikaela David-John, former Gator AISES president, recently earned her master’s degree in family, youth and community sciences at UF and is a member of the Saint Regis Mohawk tribe.

“Indigenous peoples have been around for so long, we have this great knowledge and such great worldviews and can really add such value,” Mikaela David-John added. “To not have representation in these careers and studies means that this knowledge, it might eventually go away because we aren’t being represented.” 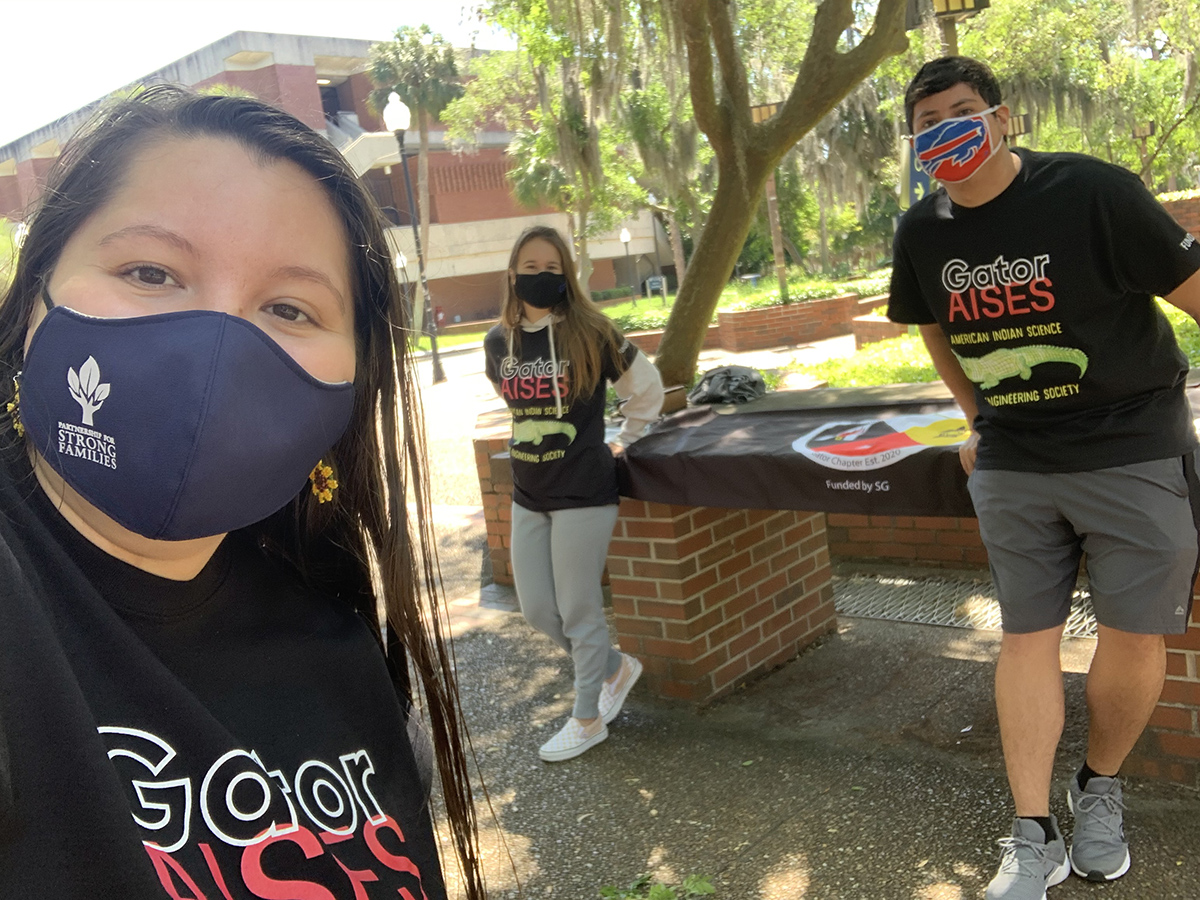 Attracting new members is key to helping the organization thrive, said Mikaela David-John, left. “We just hope to pass on this knowledge.” From left to right, she, member Cailey Porter and Brendan David-John table in Turlington Plaza in spring 2020. Photo courtesy of Brendan and Mikaela David-John

Now, with about roughly 15 members, Gator AISES hosts cultural celebrations, historical presentations, panels with Indigenous scientists, community clean-ups and more. Their mission is partly founded on the idea that actions taken today will enrich the lives of the next seven generations, which is rooted in the traditions of the Haudenosaunee Confederacy, pronounced hoe-dee-no-SHOW-nee and comprising six Native American nations, including the Mohawk and Seneca peoples.

“It’s just making sure that any decisions or actions that we make, whether it’s resources that we use, partnerships that we have or even the mission of this organization, that they are going to be sustainable to lift up the next seven generations so that they will be in a better place than we are – they will be thriving, not just surviving,” Mikaela David-John said.

Establishing a community of Indigenous scholars on a campus of more than 56,000 students is a pivotal part of their mission. Brendan and Mikaela David-John, now husband and wife, met through AISES at the Rochester Institute of Technology. But, when they arrived at UF, finding dedicated space for Indigenous students was difficult, partly because students’ identities aren’t always apparent.

“It is hard to necessarily identify an Indigenous person in most cases just because you just don’t know someone’s identity and there are so many intersecting identities – that is so key here,” Mikaela David-John said. “I think just having that safe space or a sense of community, that was our whole goal in creating this.”

“You can’t just pop up and be a professor. It’s really about supporting that slow pipeline to get the representation to the point that we want it to be. And then things can start to really flow,” he said.

UF is a land-grant university, or an institution chosen by the federal government to receive grants in the form of land in exchange for providing practical education to working-class communities. Often, the land was obtained from Indigenous tribes through treaty, surrender or seizure in the late 19th century.

“I think a big thing that we have built to, at least based on what we see in the UF environment and landscape, is how can UF or any university help out local native tribes and reservations?” Brendan David-John said. “How do we build these relationships so that, in seven generations, students have a pipeline to come from the reservation to the university if that’s beneficial for them?”

For Brendan and Mikaela David-John, forging relationships with native tribes in a new region has been one of the challenges of launching Gator AISES. Regional relationships can hinge on Indigenous representation: Deeply rooted connections are the first steps toward lasting partnerships, Brendan David-John said.

“Without some native representation that shows that it’s genuine, it’s very difficult to get those relationships started,” he said. 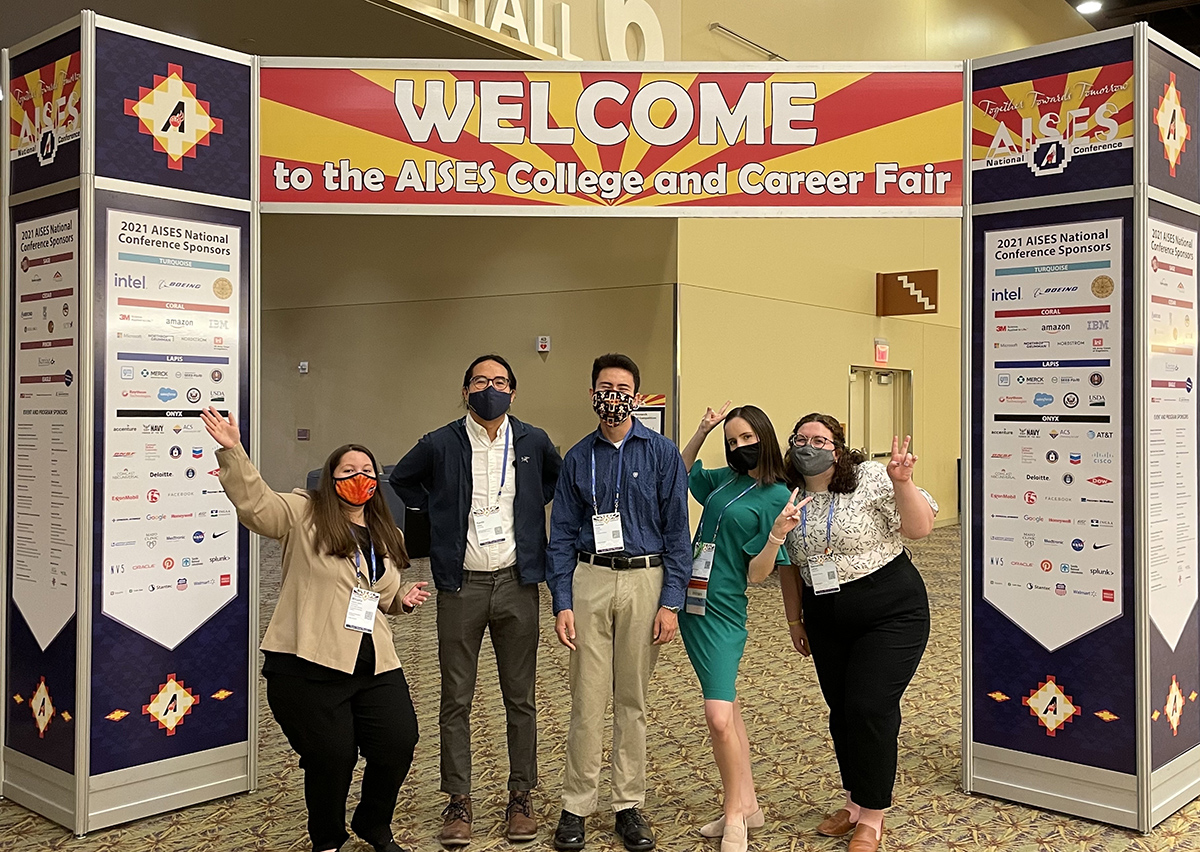 “When you’re used to being among only 10 or 15 Indigenous people on campus and then there’s 4,000 Indigenous people, it’s refreshing,” said Mikaela David-John, left, of attending the annual AISES conference. “You feel like you’re home even though you’re not.” From left to right, she, Kevin Bitsie, Hunter Goan, Elisabeth Lewalski and Samantha Latham attend the AISES National Conference College and Career Fair. Photo courtesy of Brendan and Mikaela David-John

The hope is that those relationships can result in more Indigenous scientists.

Along with the unique attributes that distinguish each tribe’s culture, resilience through shared traumas binds them together, Mikaela David-John said.

Brendan and Mikaela David-John are lifetime members of AISES thanks to the organization’s  Sequoyah Fellowships, which they were awarded in 2013 and 2021 respectively at the Annual AISES National Conference. This year, the Gator Chapter was chosen from nearly 200 AISES chapters to win the Marketing & Fundraising Award and the Stelvio J. Zanin Distinguished Chapter of the Year Award. The current president of AISES at UF, Elisabeth Lewalski, was also recognized as a Sequoyah Fellow.

Brendan David-John said the conference is a reminder of why he pursues his degree and supports other Indigenous students. The three-day event draws more than 2,000 attendees annually.

“The joy of that community plus the mission and the purpose just brings me back alive every year,” Brendan David-John said. 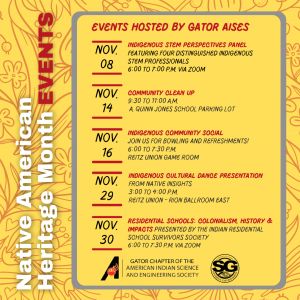