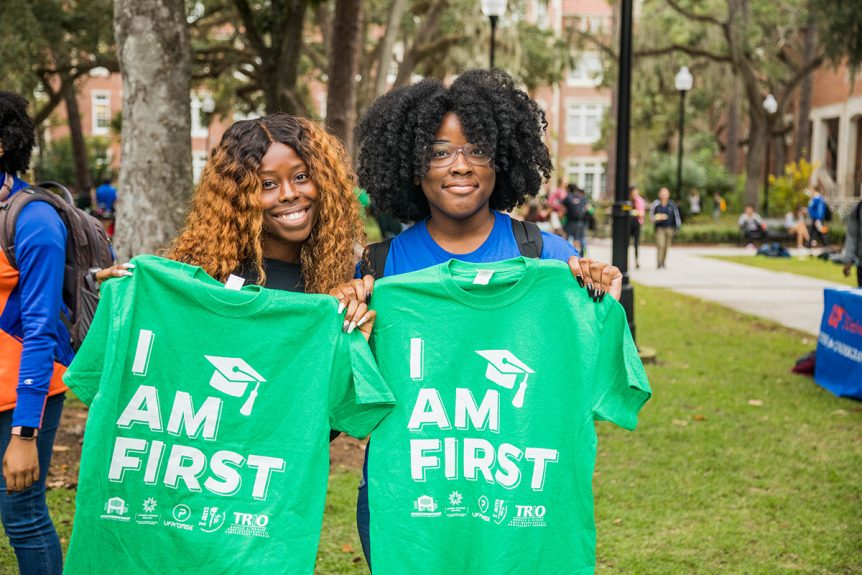 Since 2006, the Machen Florida Opportunity Scholars Program at the University of Florida has awarded more than 5,500 first-generation students full scholarships to pursue bachelor’s degrees at UF. But students in the program, called scholars, flourish thanks to its centerpiece, which goes beyond the financial award: a deeply cultivated community comprising more than 3,500 current scholars and alumni.

Today, the Machen Florida Opportunity Scholars Program, or MFOS, is one of the largest of its kind in the U.S. This fall, 400 new scholars – a record high for the program – were awarded scholarships. Currently, the program supports more than 1,200 students at UF.

“It’s not just scholarship support, it’s the connection and the community that a program like the MFOS program can provide,” said Dr. Leslie Pendleton, founding director of MFOS.

On top of the scholarship – which first-generation students who have been admitted to UF and whose families’ incomes total less than $40,000 per year qualify for – a strong network of peer and professional mentors, workshops tailored to scholars based on their year and annual traditions are staples of the program.

“I think the program has empowered students to not only be MFOS students, but to be a part of the larger community; to take the things that they’ve learned and apply it in the larger UF community,” said Dr. Sarah Whitley, vice president of the Center for First-generation Success, an initiative led by NASPA – Student Affairs Administrators in Higher Education and the Suder Foundation. 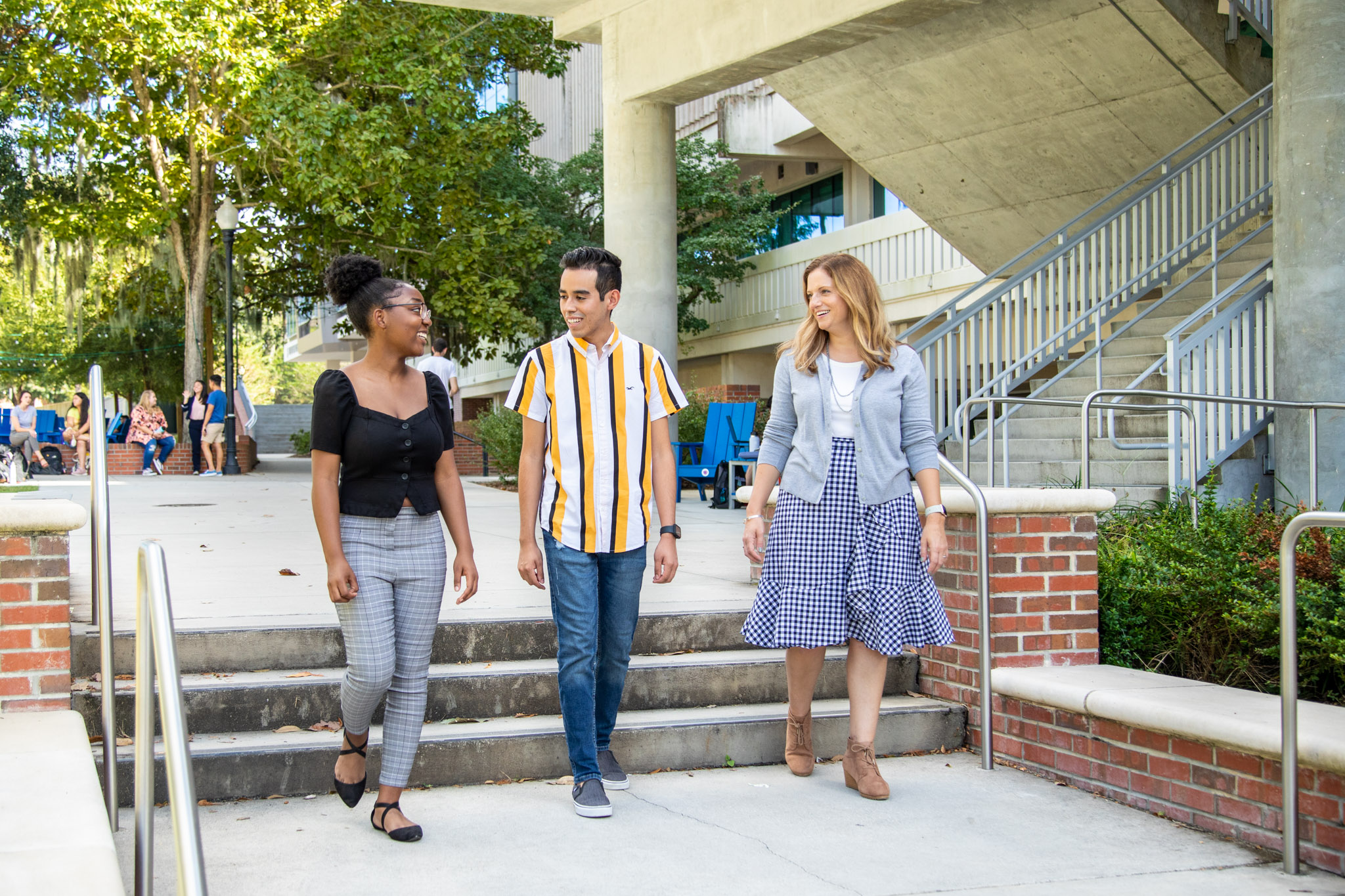 Dr. Leslie Pendleton, right, became the first full-time director of MFOS in 2009, and she hired its first assistant director five years later. In 2020, the MFOS team moved to a suite in the Reitz Union, where they occupy a centrally located office space partly dedicated to first-generation students. UF Student Life photo by Matthew August

Roughly 18% of undergraduates at UF identify as first-generation college students, or those whose parents don’t have firsthand experience applying and transitioning to a college in the U.S. Machen, president of UF from 2004 to 2014, first called for the program to curb a decline in the enrollment of first-generation students at universities across Florida due to cost.

“This program is a true equalizing force in our very unequal society,” said Amelia Harnish, a graduate of the first cohort, in a previous interview. “It’s not just studying that makes success possible. I was able to do key unpaid internships, even one in New York City, that helped launch my career. I was able to join a sorority and find a home at UF. I was able to study without worrying about how I would eat or pay bills. It was very freeing.”

A recent report by the National Student Clearinghouse Research Center found that undergraduate enrollment declined nationally by 6.5% since 2019, marking the largest two-year drop in 50 years. According to Whitley, roughly one-third of students nationally are first-generation – they’re often among the first to be impacted by trends shaping enrollment.

“We know that for a first-generation student, it can take as little as $250 – that’s a car battery dying – for them to leave college,” she said. “We need to think through how we create environments that signal success to first generation students where they can see themselves being successful, see role models, see faculty members identifying as first-gen. And then, removing barriers.” 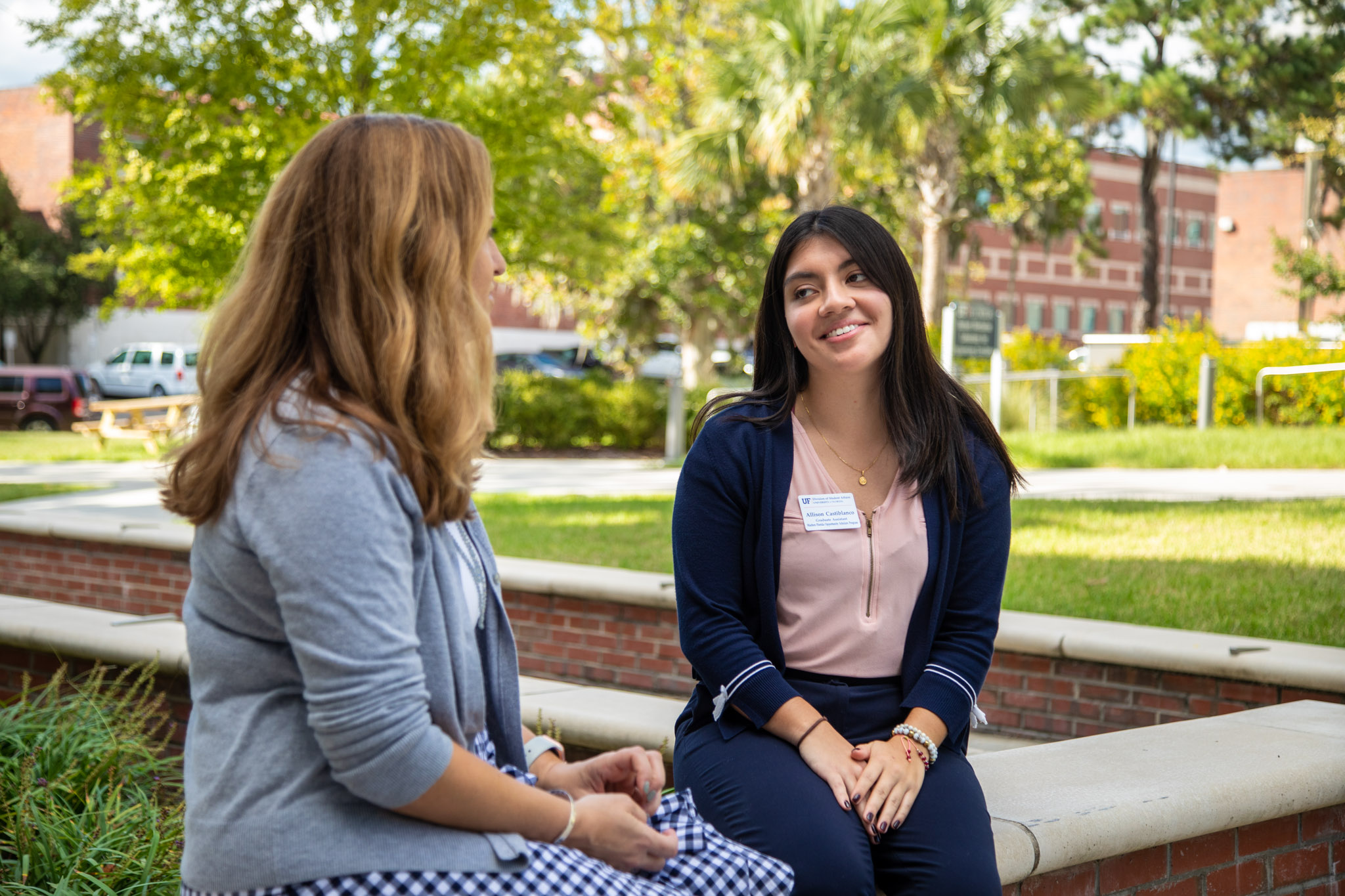 Today, Pendleton leads a professional and student staff of eight people, including Allison Castiblanco Buitrago, right, a first-year graduate student at UF. “The focus here at UF is the many remarkable skills, talents, traits and strengths scholars bring that we as a campus need,” Pendleton said. UF Student Life photo by Matthew August

Pendleton has steered the program away from one that sees scholars as students in need. Instead, it’s shaped around an asset-based approach, meaning that the strengths of first-generation students are showcased instead of perceived shortcomings.

“The students in this program, they’re scholars. They’re admitted on their own merit and they’re incredibly bright and brilliant,” Pendleton said.

“That assumption helps build this really unfortunate narrative; attaching to the first-generation student identity things that aren’t true,” Whitley said. “We know that first-generation students are incredibly resilient, they’re persistent, they have incredible work ethic. They’re balancing a ton of things on their plate and those things, a lot of times, actually contribute to making them even better students.”

Scholars’ experiences are shaped by first-generation experts – and each other

In fall 2018, Fabian Quiroga attended the MFOS New Scholar Welcome Ceremony. He sat close to the podium, where senior scholars spoke that evening.

“I remember thinking, ‘Wow, it would be crazy if I were there in three years,’” said Quiroga, now a fourth-year student studying biology.

At the beginning of this semester, he returned to the same podium to deliver his own speech on reflecting and adjusting to overcome failure.

“You look back four years later and it’s just very heartwarming for sure, but also you don’t believe it,” he said. “I think that’s growth that everyone can have, if you get involved in a way that you care to and make those relationships and build community. My story’s definitely not a fluke.”

Now a peer mentor himself, Quiroga helps other first-generation students make a home at UF. Next semester, he will attend UF’s College of Pharmacy to earn his doctorate in pharmacy.

“You’re really building such meaningful relationships here on campus, not just with staff but with your fellow MFOS scholars,” Quiroga said.

Metayer said managing her time has been a challenge, but – with the backing of MFOS scholars and staff ­– she has a secure foundation to face challenges.

“I feel like for the majority of my life, no one was quite able to really understand the weight I had on my shoulders as the eldest child and a first-generation student,” she said. “To go from having no one to being in a room full of more than 100 people is truly indescribable and a great feeling.”

Receiving the MFOS scholarship was one of the biggest signs of relief she’s ever experienced, she said.

“Honestly, without the burden of finances, I must say my own potential scares me – in a good way,” Metayer said. “For the first time in my life, the sky is the limit.”

A new documentary – produced by the Samuel Proctor Oral History Program at UF to mark the 15th anniversary of MFOS and commemorate the National First-Generation College Celebration – tells the program’s story through 60 interviews.

Learn more about MFOS at UF