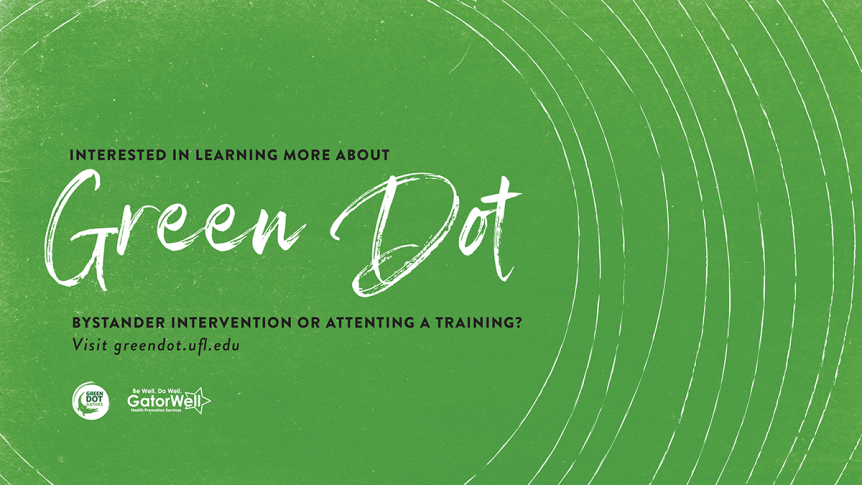 The University of Florida has been training faculty, staff and student leaders through Green Dot, a violence prevention program, since summer 2019. Now, the opportunity is open to the entire student body in the form of a 90-minute virtual training designed for groups of 10 or more students at a time.

The research-based violence prevention program teaches students and staff strategies they can use to prevent and diffuse danger stemming from stalking, sexual assault and dating and domestic violence.

When bystanders intervene in a potentially dangerous situation, they add a green dot to an interactive map of UF’s campus – a visual representation of a culture that doesn’t tolerate violence.

“Collectively, our campus attending these trainings and learning these skills is supposed to help shift our campus culture so that the norms are established, violence isn’t tolerated and everyone on our campus cares about this and is willing to step in and help out,” said Megan Johnson, a health promotion specialist at GatorWell Health Promotion Services.

The green dots on the map, one at the Plaza of the Americas and one outside the student union, represent times students intervened in situations that could have become dangerous. Students can add dots to the map at greendot.ufl.edu. UF Student Life image

Students can now sign up for a virtual training, led by GatorWell staff, here. Individuals or groups of fewer than 10 people can open their training to others, while groups of 10 or more can request a closed training or open it up to others.

Nearly 1,000 students at UF – including the football team, Student Government and students in Greek organizations – have already completed the program. The training uses breakout rooms, polls and the chat feature to foster engagement and interaction among attendees.

Green Dot curriculum focuses on three methods students can use to intervene in a potentially violent situation: direct, delegate or distract. The methods can help students directly approach those involved, call on someone else to intervene or create a diversion to defuse the situation.

During the training, participants are presented with a specific situation and briefed on warning signs for potentially harmful situations and possible barriers to intervening. Then, using the three intervention skills, participants practice overcoming those barriers by taking part in activities to solidify their knowledge, Johnson said.

Although training content is relatively consistent across universities, the program uses local examples such as tailgating at a football game, going out to a bar in Midtown or leaving Library West late at night.

Relatable situations allow students to feel as if they are a part of the conversation, Johnson said. By examining scenarios that hit close to home, students are prompted to consider how they could take action in familiar spaces.

At the end of each training, participants are assessed to gauge whether they think they are more equipped to stop potentially violent situations from escalating. 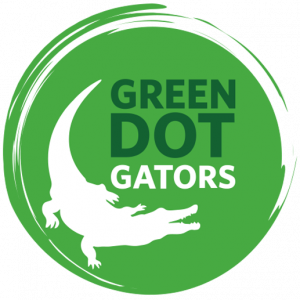 “If they feel like they can do it, they’re likely to go out and do it ⁠— which is likely to reduce harm on our campus,” Johnson said.

Green Dot, which has been implemented on more than 100 college campuses nationwide, follows a standard, top-down implementation plan: First, train staff and faculty, then, student leaders and, finally, the whole student body.

The process is based on diffusion of innovation theory, which outlines the stages associated with the spread of technology and new ideas. According to the theory, once an innovation has been accepted by roughly 15% of the target population, its adoption proliferates.

Facilitators at GatorWell, part of UF’s Division of Student Life, began by training student influencers to enable information to spread organically among the general student body and shift campus culture.

“It’s slow, which is frustrating sometimes for administration and students. And part of the reason there is such a specific implementation plan is in order for it to be effective. So, it’s not that we don’t care — it’s just we’re trying to do it the right way,” she added.

On a campus with more than 54,000 students, identifying student influencers also posed a challenge, Johnson said.

Green Dot is part of the university’s response to a 2019 survey indicating that the rate of reported sexual assault and sexual misconduct cases had increased at UF and other universities in the U.S. since 2015.

Although Green Dot aims to reduce rates of sexual assault, the network of factors driving the statistics – including how comfortable students feel reporting incidents – prevents specialists at UF from drawing an automatic correlation between trends and Green Dot efforts, Johnson said.

Instead, specialists at GatorWell will measure the success of Green Dot by observing campus culture. She said the program’s end goal is to be able to see the normalization of bystander intervention on campus, shifting culture in a way that prompts students to step in during situations of potential harm.

“Just seeing that our campus has changed,” Johnson said. “That we’re walking around campus, and we’re seeing individuals intervene.”

Learn more about Green Dot and the types of trainings available.

Register for a training here or reach out to Megan Johnson at mejohnson@ufsa.ufl.edu.

GatorWell’s mission is to empower UF students to be healthy and well through prevention. Learn more about GatorWell Health Promotion Services.