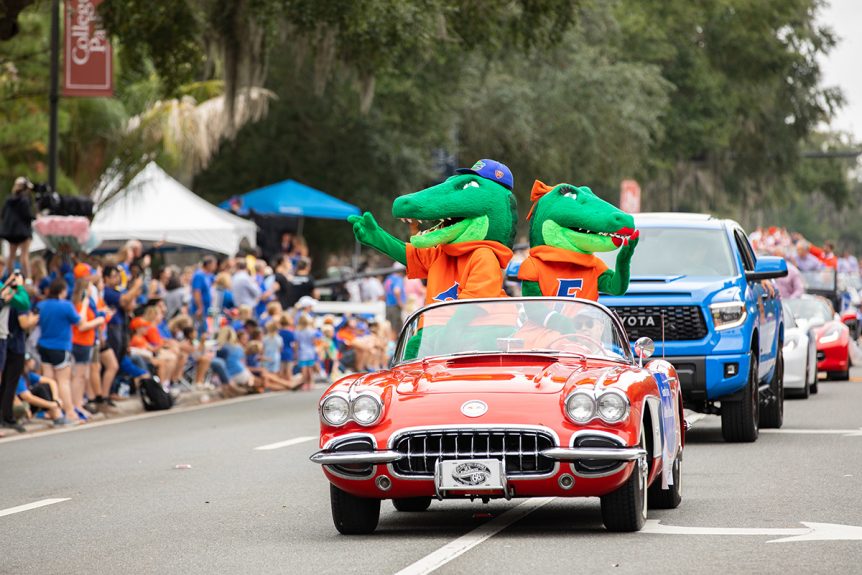 For generations, students who have served on the UF Homecoming & Gator Growl team have shaped the hallmark traditions for students, alumni, faculty, staff and the greater Gainesville community.

Behind the celebrations, a force of more than 200 students orchestrates the events that draw thousands annually. As a result, Gator Growl and the parade are some of the nation’s largest student-run events of their kind.

These are the students who brainstorm artists and talent for Gator Growl. They advertise events, manage budgets and secure judges for the pageant, a feat that includes coordinating with Florida’s representative in the Miss America competition. They work with the city and state to close roads for the parade. Then, they collaborate with local news stations to broadcast it.

With so many responsibilities, learning to manage challenges is key. For Brady Alexander, executive producer of Gator Growl, overcoming obstacles is what inspired him to keep working with the team. This year’s concert will be the third he has helped produce.

His favorite memory? The night before the 2019 Gator Growl, wrapping up what had been a weeklong loading process at Flavet Field, where the concert used to be held.

The first problem arose at 3 a.m., when the hotel the team had booked for production and artists called Alexander to inform him that one of the rooms wasn’t available. After scrambling to find a different one, he headed back to his apartment at 3:30 a.m. — only to receive another phone call from Superior Towing, who told Alexander that he was listed as the event’s main contact and needed to return to Flavet to sign off on all the parked cars.

“So I go back, sign those off, go back to my apartment, get about an hour of sleep, go back at 7 a.m. — and then it’s the day of show,” he said. “I’m there setting up. We have all the artists coming in, we’re doing final soundchecks, final lighting checks. And it was at that moment I knew I wanted to stay with Growl.” 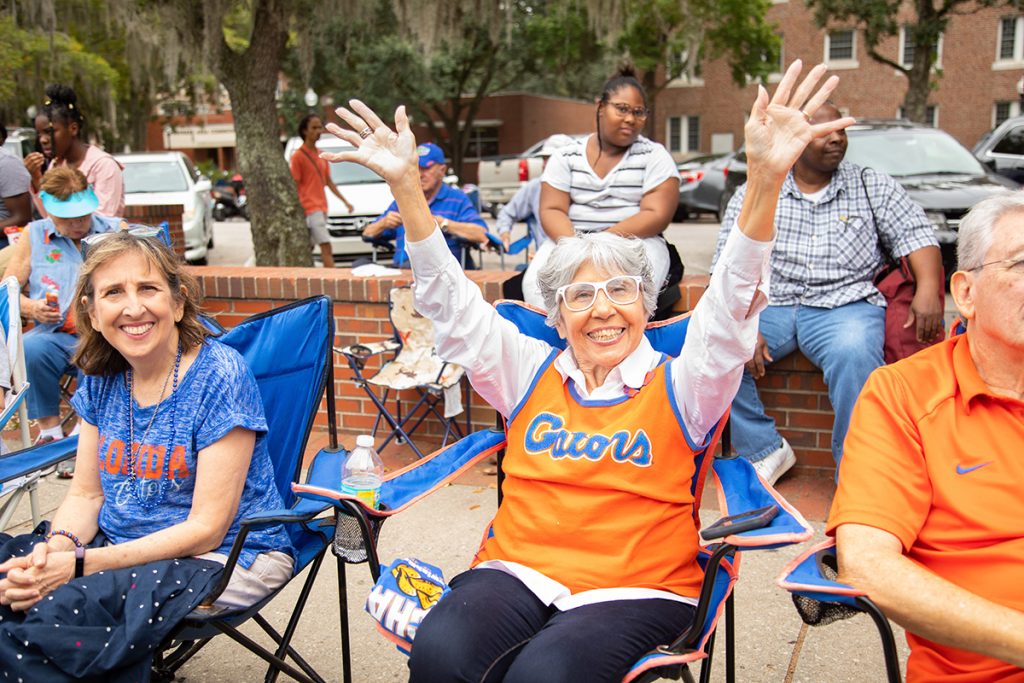 Homecoming at UF began in 1916 with the return of 200 visiting alumni. Over a century later, thousands of alumni still make the trip for homecoming weekend. UF photo by Brianne Lehan

The earliest homecoming traditions at UF date back to 1916, when 200 alumni returned to cheer on the Gators as they faced Alabama’s Crimson Tide in late October. The celebrations were sporadic until 1923, when Florida Blue Key, a student honor society at UF, took over the planning.

Today, current students, many in Blue Key and Student Government, are the driving force behind the hallmark events that now draw thousands of visitors annually. The planning process is a nearly yearlong commitment: Once execution wraps for one year, preparation immediately begins for the next.

Annika Katare, this year’s homecoming general chair, applied for her position in December 2020. Since then, she’s led the planning alongside Alexander and their two respective student assistants. Other students head eight committees, each comprised of a set of directors and assistant directors. This hierarchy makes up the foundation of all the planning homecoming requires.

“I don’t think it realistically could be done without the student force,” Katare said. “It’s their vision that’s coming to life the day of.”

Between February and May of this year, Katare and Alexander built a team of associates, directors, assistant directors and committee members. Students chose a theme for the celebration, held meetings, discussed team feedback from previous years and built a team-wide sense of community.

Then, starting in June, the team released a final round of staff applications aimed at first-year and transfer students. For these roles, students don’t need any prior experience on the team. First-timers shadow current members, establishing a new generation to which graduating students can pass the torch.

Justin Donnelly, associate director for campus events and traditions, works directly with the team to make homecoming and Gator Growl happen — though he described his role as mainly behind-the-scenes guidance.

“It is really the students who drive the bus on everything,” he said, “and then I am there to help them navigate through any issues they come across.”

“Our site almost crashed that night because of how many people were watching,” Alexander said. “This was the first time, too, that everybody around the world could watch it.”

This weekend will be a comeback year for the entire university, marking the first year since 2019 that UF will host an in-person homecoming celebration. Alexander said the team “really wanted to focus on school spirit” to welcome students back. The theme is “Heart of the Gator Nation.”

Festivities begin at the Homecoming Festival the morning of Friday, Oct. 8 with games, live music and food at the Plaza of the Americas. The Gator Gallop, a two-mile fun run, begins roughly an hour before the annual parade, which features floats from more than 120 student organizations, businesses and charities. Gator Growl – a pep rally with live musicians, student performances and comedy – takes place that evening in the Stephen C. O’Connell Center.

Friday’s events culminate in the weekend’s home football game on Oct. 9 at noon, where the Gators will face the Vanderbilt Commodores. Soulfest, a multicultural showcase featuring student performance groups across UF, closes out the weekend Sunday night in the Grand Ballroom of the Reitz Union, finally giving attendees a moment to catch their breath

For Alexander – and all the students who have devoted their time to producing the upcoming weekend – the months of planning and challenges are well worth the payout.

“I am passionate about creating student experiences that will leave everlasting memories,” he said. “Homecoming is almost a 100-year tradition at the University of Florida, and I want to keep that legacy alive.”

Tickets for Gator Growl are available online or at the Stephen C. O’Connell Center box office. Pricing starts at $25 per ticket for students and $40 per ticket for the public.

Learn more about UF homecoming queens and kings through the decades.