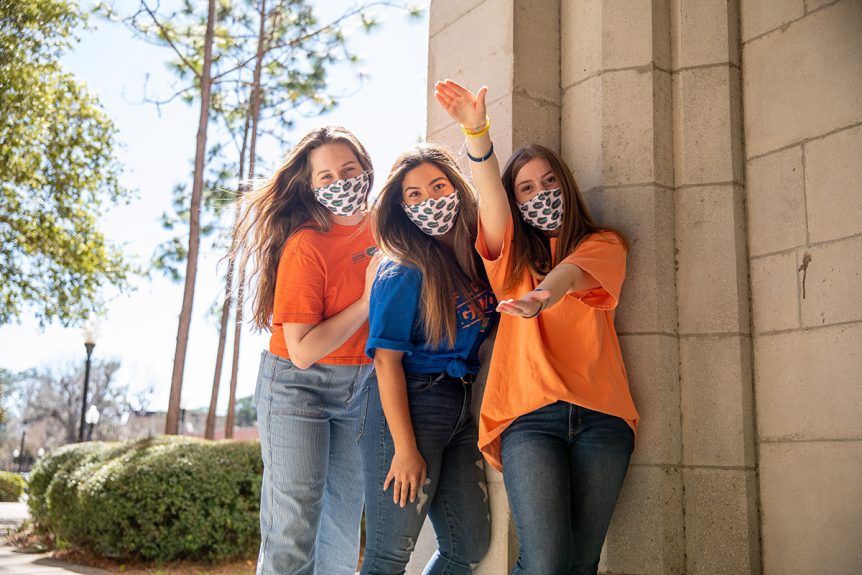 Delaney Dietrick first started applying to on-campus jobs to ease out of the customer service industry.

“I wanted to have a job that was actually in the field that I’m studying. Working as a student designer is a good way to get experience without being stressed out about trying to freelance or have an internship somewhere,” said Dietrick, who works as a barista and recently joined the University of Florida Division of Student Life’s marketing team as a student graphic designer.

Despite feeling intimidated by the application process, Dietrick applied to her position at the urging of a friend in a similar role at GatorWell Health Promotion Services. Now, she designs T-shirts, graphics for social media and more for departments across UF’s campus.

Perks include setting her own schedule and Tenders, a stray – but friendly – cat who lives outside the marketing office. Dietrick said she’s been pleasantly surprised by the community she’s found at work. She’s grown comfortable receiving feedback on her designs and enjoys having creative freedom.

Marketing and communications, the department Dietrick works in, is one of the more-than 25 departments that make up the Student Life at UF. Across the division, students – including those who don’t qualify for federal work-study – can work a variety of paid roles year-round. Many of those jobs come with flexible schedules and opportunities to advance.

According to the National Association of Colleges and Employers, recruiters don’t rely on GPA to indicate whether someone is qualified for a job. Instead, roughly 80% of employers said they look for evidence of teamwork and problem-solving skills on resumes. Other top skills include leadership, initiative and flexibility.

These types of skills are known as soft skills – they’re also part and parcel of student jobs at UF. Vollrath said the Career Connections Center encourages supervisors to design roles that will test specific soft skills and help student employees learn how to communicate them.

Emily Jackson, who officiates softball and kickball at the Department of Recreational Sports, said her job has strengthened her decision-making.

“I would say my leadership skills have definitely developed and I’ve become more self-assured,” she said. “It’s really fun – you almost feel like you’re playing because you’re on the field with everyone and involved in every play.”

“I’ve spoken to alumni and they talked about how just having that on-campus job helped them understand what it was going to be like to have a quote-unquote ‘real job,’” she said.

Ashley Jenkins, a career foundations intern at the Career Connections Center, said in her previous roles at small organizations, one person could have a job that could “theoretically be done by 20 people.”

“It just didn’t leave a lot of wiggle room for making friends with your coworkers or having these longer more, more team-based meetings,” she said. “Here, there’s so much in place foundationally that it makes it easy to have the time to form those bonds and that community because so much of the groundwork is already there.”

Her favorite day on the job so far was attending a workshop on how to improve current programming at the Career Connections Center with a strong social media presence.

“I think that just made me feel so energized because it was pretty early on in my internship and it was one of the first times where I was like, ‘Oh, they’re treating me like a peer,’” she said. “They’re not like saying, ‘Intern, go do this task.’ It’s like, ‘Hey, you’re a student. What do you think about this? What’s your perspective on this?’”

Vollrath added that UF is known for being a reputable employer, so an on-campus jobs signals to recruiters that students were held to high standards. In addition to building soft skills, employees in seemingly simple roles across UF play a central part in welcoming visitors to campus, improving life for other students and supporting key services.

Alana Jones has worked at the front desk of the Reitz Union Hotel since 2018. A normal shift answering phone calls, filing paperwork and helping co-workers. She said she put off applying because she wasn’t sure she would like it. Now, she wishes she applied sooner.

“A job description is not always the best representation of a job. It might sound really boring to file paperwork or something similar, but it definitely is more exciting when you’re in it,” she said. “You have a task and a goal to work toward and you have people around you working with you.”

Find a part-time job at the Career Connections Center’s Part-Time Job Fair tomorrow, Sept. 2, from 10 a.m. until 2 p.m. on the lawn on the Reitz Union. No registration is required and casual attire is encouraged.