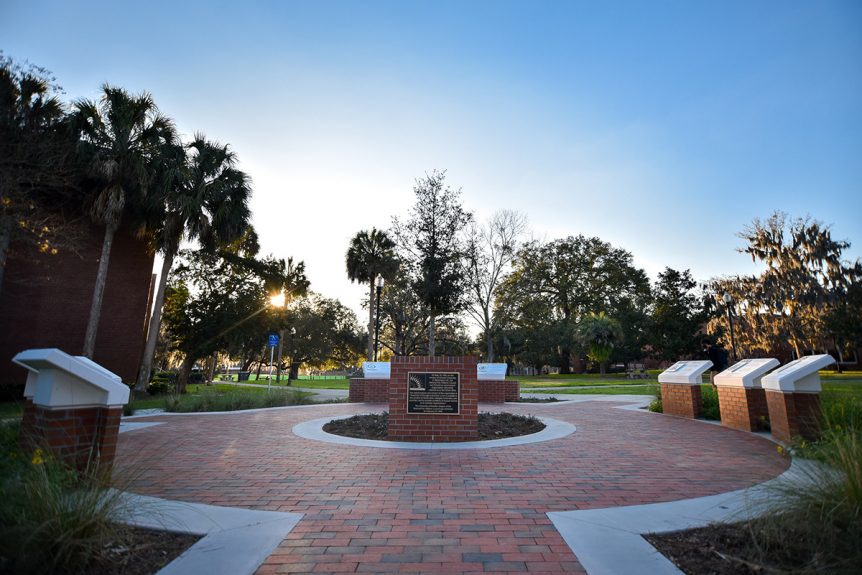 Historically Black sororities and fraternities are known for their steady advocacy and strong pride. Now, for the first time, the leaders of Black Greek-letter organizations at the University of Florida will welcome home members who joined during the pandemic.

“We can do it even better. Like, if you enjoyed it then, let me tell you how much you’re going to enjoy it now,” said Candace Kanney, a third-year student at UF and executive vice president of the National Pan-Hellenic Council, which represents the nine historically Black sororities and fraternities at UF.

Initiation into a Black Greek-letter organization is called “crossing the burning sands,” usually marked by a show featuring dances known as strolls. Kanney, a member of Delta Sigma Theta, did so during the pandemic.

“I’m really excited to step onto campus this fall and see the difference,” she said.

The five fraternities and four sororities of the National Pan-Hellenic Council, or NPHC, are known as the Divine Nine. The first Black Greek-letter organization at UF, fraternity Kappa Alpha Psi, was established on campus in 1972. Zeta Phi Beta, the first historically Black sorority at UF, was established two years later.

Today, two Divine Nine sororities and each of the fraternities have an active chapter at the university.

By the time the NPHC was formed in 1930, most of the Divine Nine already existed. But it marked a turning point for unity among Black Greek-letter organizations, said Xavier Ansley-Black, a fourth-year student and president of the NPHC at UF. 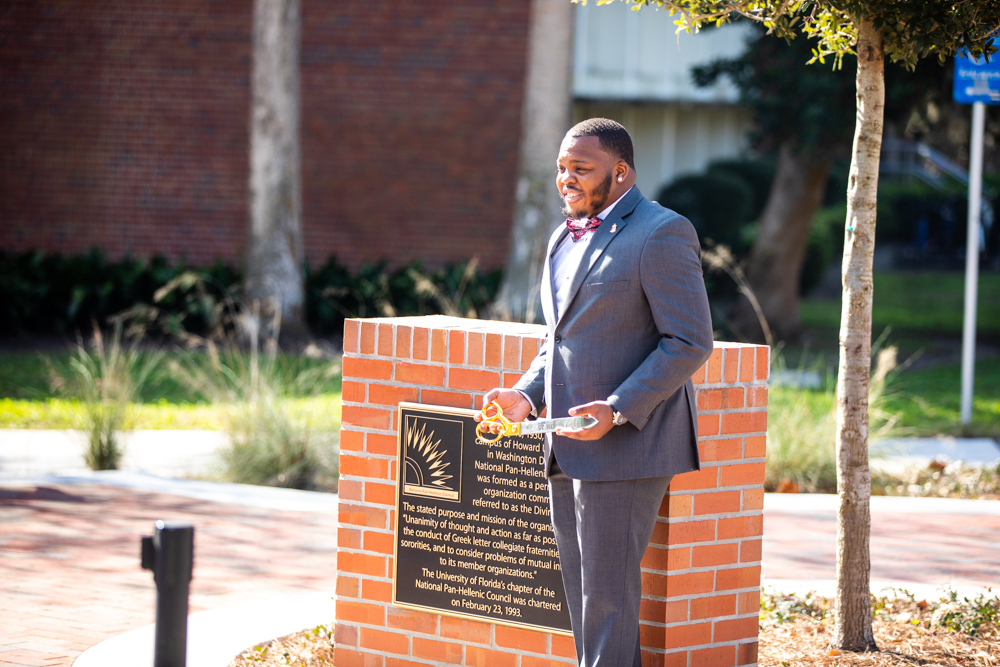 In January 2021, Xavier Ansley-Black, president of the National Pan-Hellenic Council at UF, spoke at the opening of the NPHC Gardens, located on UF’s North Lawn. UF Student Life photo

“I think it’s important just for the simple fact that we’re stronger together. Historically, our organizations did that in a time where we needed to come together anyway as a community to help each other because at that point in time there weren’t that many people trying to help,” said Ansley-Black, who is a member of Kappa Alpha Psi.

As the Divine Nine emerge from the pandemic, generating more recognition across campus is a priority, he added. Ansley-Black said one important step was the completion of the NPHC Gardens, a physical tribute to the Divine Nine at UF, in January 2021. The location is now part of the university’s F Book, a collection of landmarks and traditions at UF.

“We can be a resource to students that they might not have known. There’s a lot of students that come to UF that go throughout their whole time, but they don’t know much about us or even know that we’re there.”

Dylan Gibson, a fourth-year student and administrative vice president of the UF NPHC, said building interaction among Divine Nine chapters was a key challenge last year. Numbers dropped. Engaging people in council-wide events was difficult, partly because it was hard to differentiate virtual council meetings from ones many students attended for class.

Gibson, a member of Alpha Phi Alpha, was charged with leading the NPHC’s council-wide town halls, typically held twice a semester for members to hear updates on initiatives and share their perspective on issues. They voiced new concerns about their social lives, academics and mental health.

“They were physically fine, they were able to still do their schoolwork, get on Zoom calls, stuff like that, but mentally and maybe spiritually, they were not all the way there,” Ansley-Black recalled.

The NPHC launched a series of virtual events, partly to share educational resources on COVID-19, but also to enable members to express themselves and share how they kept up with schoolwork and their social lives amid uncertainty.

Despite the pandemic, the Divine Nine continued initiating classes of new members. Kanney said the first virtual ceremony she helped lead, which took place with the Multicultural Greek Council, is among her most memorable moments with the NPHC so far.

Getting “back to basics”

Like Kanney, Gibson will also be experiencing Divine Nine traditions in person for the first time in August, including Set Fridays, where members perform in Turlington Plaza with the Multicultural Greek Council and the Black Student Union. He said getting “back to basics” by focusing on collaboration, hands-on service events and reconnecting with alumni will be key.

“There will just be a great atmosphere seeing people come back together to help build community,” he added.

This fall, continuing the service initiatives the Divine Nine are known for is a priority, Gibson said. Many, such as Alpha Phi Alpha’s Go-to-High-School, Go-to-College program, which he currently leads, are aimed at supporting Black students and community members. Uniquely, the NPHC is also known for scholarships that applicants don’t need to be affiliated with the Divine Nine to qualify for. 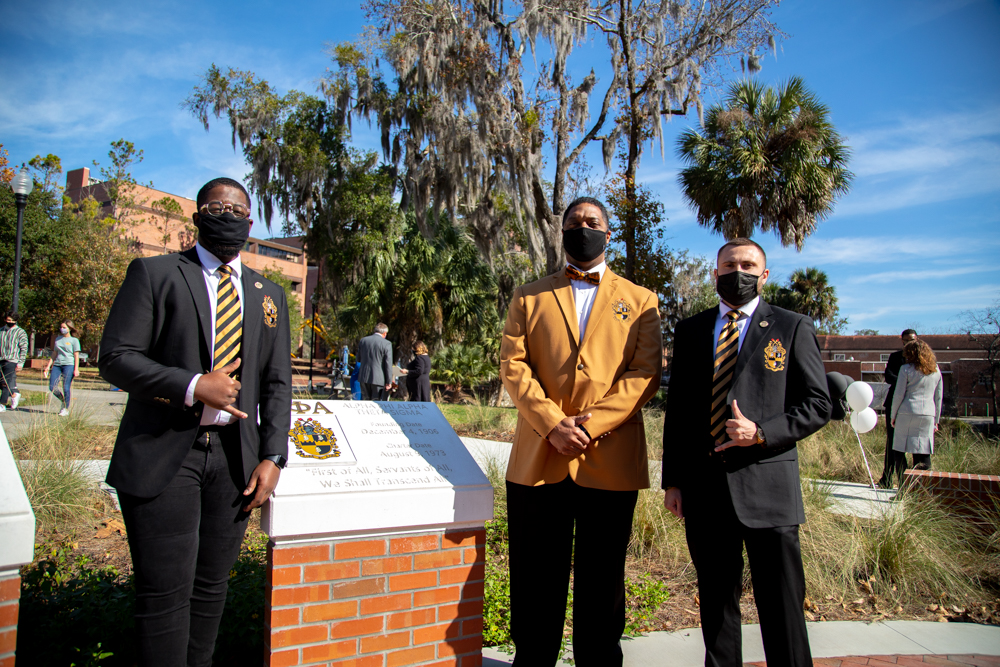 Because Divine Nine fraternities and sororities range in size from roughly 11 members to 25, the variety and timing of service events tends to be tailored to local needs, said Gibson, right. UF Student Life photo

Kanney added that the Divine Nine’s competitive drive leads to creative service events that build on one another. The council’s close-knit network has also resulted in a strong alumni community.

“For me, since I was a little kid, I’ve watched my now 55-year-old mother continue going to sorority meetings, continue to go to conferences,” she said. “The moment you graduate you’re expected to join the alumni chapter, continue to put in the work.” 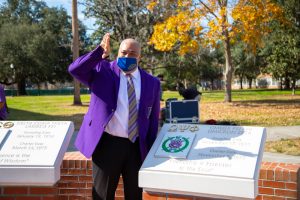 The NPHC is known for its strong alumni network. Here, an alum of the fraternity Omega Psi Phi stands next to the organization’s plaque at UF’s NPHC Gardens. UF Student Life photo

To new members, Gibson acknowledged, the tight-knit group could seem intimidating. But bridging the gap between new students – whether they’re first-year students or just new to campus – will be a key focus in the fall, Ansley-Black said. His advice for potential members? Don’t rush it: Make genuine connections first, and “let Greek life happen naturally afterwards.”

The NPHC will also hold their first-ever convocation on September 19 from 5 to 8 p.m. Potential new members are required to attend and the dress code is business professional.

Learn more about the NPHC.

Learn more about the NPHC Gardens.