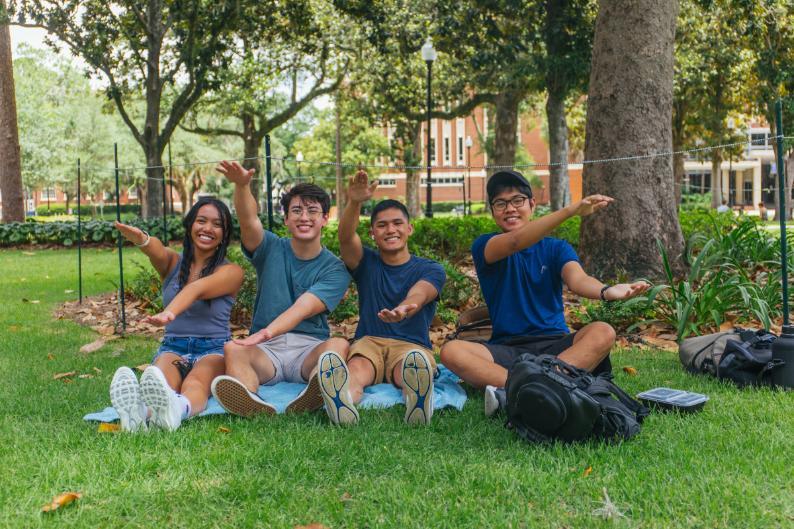 The University of Florida kicked off the Summer B semester on Monday, resuming fully in-person operations for the first time since the start of the pandemic.

As the day went on, students explored the campus, introducing themselves to new friends while others spent time at the Plaza of the Americas soaking up the sun.

Among those enjoying the weather were Aaron Estrellado and his friends, second-year students excited to see the campus come alive after a year of limited capacity. Estrellado said that after a year of physical distancing on campus, “it felt so weird” initially to see everyone interacting with each other in classes held at full capacity.

Graysen Panganiban, another second-year student, came to campus to enjoy the ambiance, even though he is not currently taking classes.

All three said there are many things they’re looking forward to doing this fall. But football topped the list for some.

On Tuesday, as part of the Great Gator Welcome, the Division of Student Life hosted GatorMania, where students could learn more about organizations on campus. The division also hosted a Student Life picnic and GatorNights, which featured free movies, activities and food.

In addition to returning students, UF is welcoming an estimated 2,000 new students. Their excitement started as early as Friday, with many exploring campus and settling in at their residence halls.

First-year students Noah Zhuo and Sam Dedio were among those kicking off their academic careers on Monday. They said they were both enjoying seeing so many people out and about at Turlington Plaza.

“There’s so much to see,” Dedio said. “I’m really glad that everything is back to normal.”

Zhuo said he is looking forward to joining clubs and living on campus, especially after spending his last year of high school mostly learning online.

“I want to meet new people, explore the city,” Zhuo said. “Everything is just so new. I’m just really excited.”