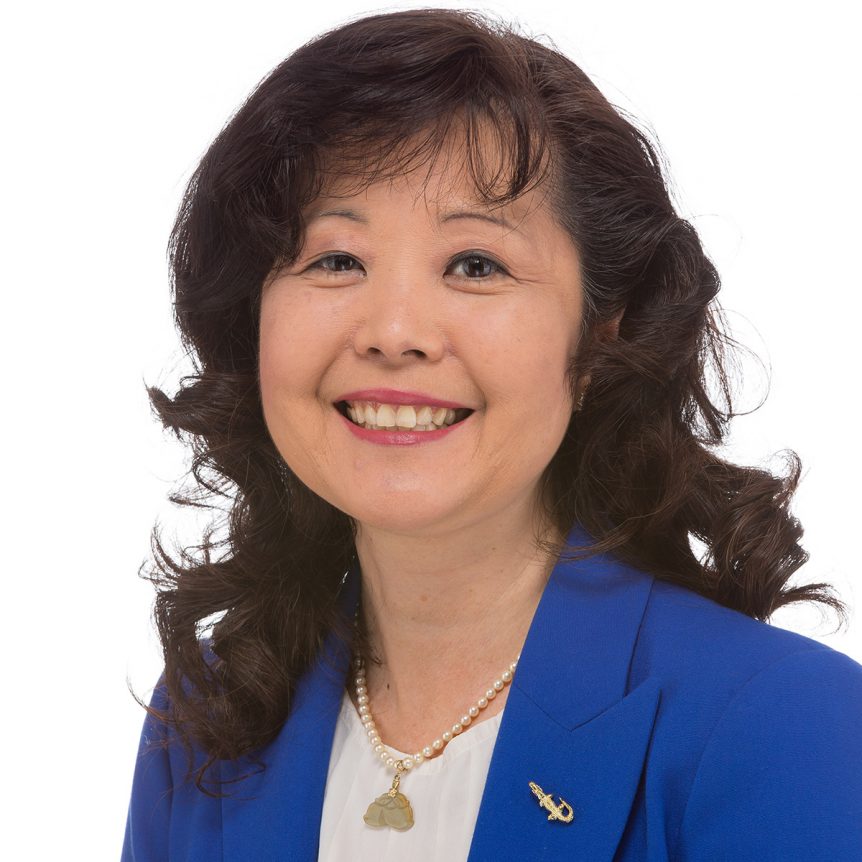 Colleagues know Kim Pace as an authority on University of Florida matters: She either knows the answer or can pinpoint who does. As the assistant vice president for the Division of Student Affairs, Pace is the highest-ranking Asian American woman at the university to date.

But she said she looks forward to the day when that’s not true.

“That’s the last thing I ever think about in terms of my professional identity,” she said. “I want to see folks from all different walks of life when I look around here, and I’m very optimistic that’s definitely the direction the university is moving in – to have a wonderful, diverse array of different leaders from all different kinds of experiences.”

Pace, whose grandparents immigrated to Hawaii from Japan in the early 1900s, was born and raised in Hilo, a town of just over 40,000 people on the eastern side of the Island of Hawaii. At 18, Pace and many of her high school classmates left for colleges on the mainland. She went to the University of Washington in Seattle, where she earned bachelor’s degrees in political science and Japanese, before earning her doctorate in law from the University of San Francisco.

“It was a very slow, easy, quiet upbringing that would be peaceful and fulfilling for many people but would also drive your average 16-year-old probably crazy,” Pace said.

She added that she was most homesick for island food as she moved eastward. She recalled the Hawaiian plate lunch, a traditional meal in the state that typically comprises two scoops of white rice, macaroni salad and an entree such as slow-cooked pork shoulder or slices of canned meat wrapped in seaweed. Adapted from Japanese bento, it was a popular midday meal beginning in the 1880s, first at sugar and fruit plantations and later at construction sites.

“We are big into food here,” Pace said of Hawaii. “That’s one of my favorite things. There’s something so different and tasty about some of the meals that you get on the islands.”

Bringing personal narratives to the table

In the 1890s, Japanese immigrants established Japanese language schools, where they taught their children how to read, write and converse in Japanese. But instruction was halted in 1942, when the U.S. government authorized the internment of anyone with Japanese ancestry, including American citizens.

Although some of Pace’s relatives attended Japanese schools, her mother didn’t. Still, Japanese was the primary language spoken in many homes.

“The language barrier was significant. She never had the ability to really connect on language with her parents,” Pace said. “I see that as, in one sense, unique and enriching to all our experiences but, on the other hand, I see many of our families go through that.” 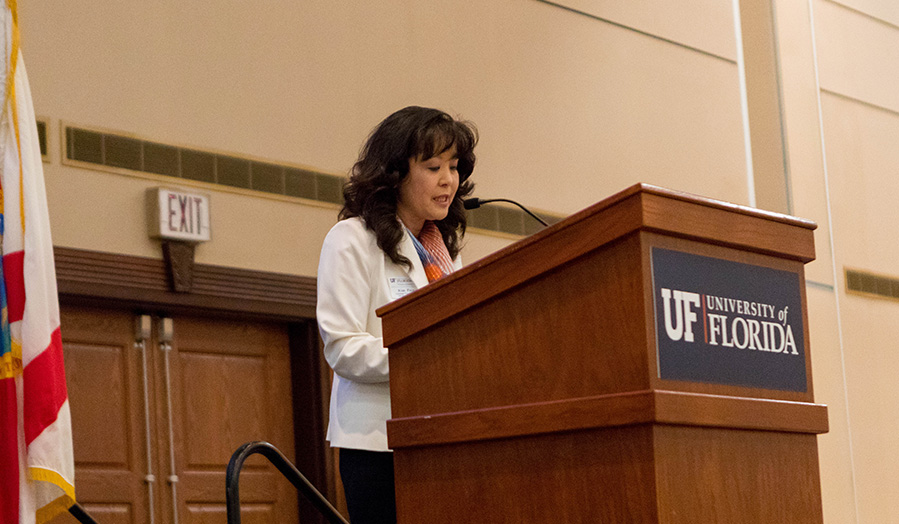 “It shouldn’t just be me,” Pace said of being the highest-ranking Asian American woman at UF. “But I think we’re very much moving in the right direction.” Here, she speaks at a Division of Student Affairs awards ceremony in 2017. UF Student Life photo by Kyle Allport

Her experiences enable her to connect to first-generation students and advocate for others facing language barriers at home, Pace said. Nearly a decade ago, a group of undergraduates at UF petitioned for more courses in Asian languages. For many, formal training would help them communicate with their families.

When people questioned why the students couldn’t learn from their parents, Pace shed light on the language barriers that can divide multi-generational Japanese families in the U.S.

“The students wanted to be able to understand fully and express fully to their parents, and I had to explain to people what that meant and why it was important,” Pace said. “It was very difficult because I think it might have been so far beyond anybody who grew up in an English-speaking household and never had to learn a language in that environment.”

Previously, Pace was an instructor for First Year Florida, a course designed to introduce new students to UF’s history and resources. She also leads the Reitz Scholars Program, the tenets of which are intersectional leadership, pushing boundaries and strengthening communities through diversity.

“I see so many of our students really putting a lot of pressure on themselves, and a lot of it is family-based from our first-generation students whose parents see maybe a couple familiar pathways to success,” Pace said. “A lot of our students have to help their families understand, ‘No, I actually can get a job if I major in something that you may have not even heard of,’ and there’s a whole heap of extra worry and pressure on those students.”

A two-year stay that turned into a new home

Pace first arrived at UF in 1989, planning to stay only two years. From the College of Liberal Arts and Sciences, she moved to the provost’s office and eventually, in 2015, to Student Affairs. In her current role, she helps oversee the division’s 13 departments. Over the years, sweet tea, Hoppin’ John and boiled peanuts, also a staple in Hawaii, have become some of her favorite Southern foods.

“A delicious biscuit can make a huge difference in someone’s life,” she said. “Lots of delicious Southern meals have become important to my family for a number of years.”

Pace said she looks forward to seeing new generations of leaders share their identities and experiences, fueling change at UF.

“There are still times that, if I look around the room, I am the only person who looks like me,” she said. “But I love the direction the university is going right now, and we have so many people in Student Affairs who are strong advocates in so many different spaces.”

She added that her identity comprises layers of her experiences, expertise and heritage.

“It’s all about the diversity of experiences. It’s what you have, what you bring with you and how you have transformed your experience into how you see and improve the world. It’s all muddled up into ‘identity,’ but sometimes we can pick and choose what have been the most meaningful experiences in our lives,” she said. “I’m just the one who grew up in Hawaii who lives very far from family and experienced a wonderful, unique upbringing that’s still very much tied to what makes my heart and soul happy.”